Today, on 16th May 2019, Tempus Resources Ltd (ASX: TMR) announced multiple updates, i.e. Ecuador Asset acquisition in May 2019 and the proposed appointment of Gary Artmont as an Independent Non-Executive Director. In its Ecuador Asset Acquisition Presentation May 2019, TMR highlighted about its binding agreement to acquire two Ecuadorian companies, Condor Gold S.A. and MiningSources S.A. (Zamora Projects) for US$100,000 cash and 3,446,205 Tempus shares. Zamora Projects comprise the highly prospective Rio Zarza and Valle del Tigre projects in the Zamora Mineral District of south-eastern Ecuador. Concurrent with the transaction, Tempus proposes to appoint key experts in epithermal gold exploration and Ecuador, being: 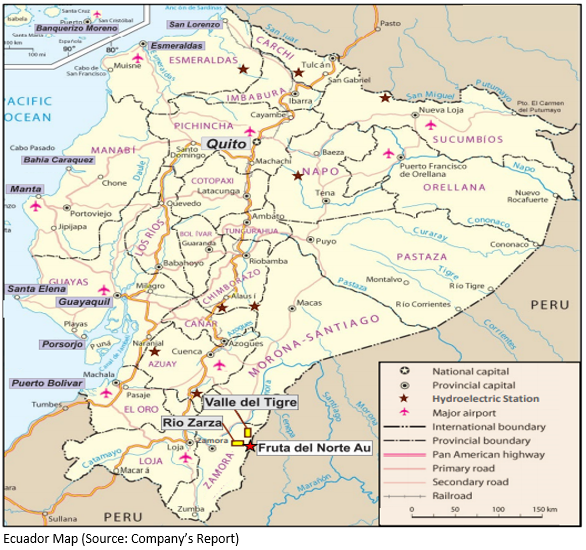 In the current scenario, Ecuador has become one of the most sought-after exploration jurisdictions for gold and base metals exploration with some of the reputed groups such as BHP Group Limited ( ASX: BHP), Fortescue Metals Group Limited (ASX: FMG), Newcrest Mining Limited (ASX: NCM) and Rio Tinto Limited (ASX: RIO) have made advances in the country. The country occupies the northern extension of the world-class copper porphyry belt, which hosts at least 30 deposits with reserves in excess of 1 billion tonnes situated in Peru and Chile. The northern portion of this copper trend is under-explored in Ecuador and offers tremendous potential for discoveries in the Miocene and Jurassic mineral belts. Pro-mining policy shift and reforms had commenced in 2013, including the elimination of windfall tax, VAT rebates, royalty rate reductions and simplification of the permitting process for early-stage projects. Ecuador received “Best Country” award at Mines and Money London, England in Nov 2017. The country also offers low-cost energy as it is an oil producer and has four hydroelectric power stations completed with three more under construction. Energy costs have estimated to be at $US0.06 to $US0.08/Kwh.

Tempus has assembled sector-leading experts within its Board and Management for epithermal gold exploration, in-country Ecuador expertise and mineral company management and finance.