Synlait updated investors and market regarding Pokeno land, which was subject to the long-pending decision in the Court of Appeal.

Synlait, in February 2018, made an announcement to establish its second nutritional powder manufacturing site. SM1 was optimistic that the land covenant was irrelevant, as the Pokeno land being rezoned as industrial land from grazing land and the development in the Pokeno area, including the development of another dairy plant.

Post announcement for the elimination of land covenant from High court last year, the company took the legal title. However, yesterday the High Court decision was reversed. Synlait Management stated that it will take some time to analyse the decision and discuss with various consultants. The company believes that the land covenant issue must be resolved by the parties involved. SM1 intends to continue with its strategic plan at Pokeno.

In another update, the company stated that it applauds the Government’s zero carbon bill announcement. SM1 is projected to achieve the target of 35% reduction in greenhouse gas emissions (GHG) by 2028, which also includes methane reduction by 30%.

The company released its presentation of the Macquarie Australia Conference on 2nd May 2019, reporting its business model and financial performance. Revenue for FY18 stood at NZ$879.0 million, reflecting CAGR growth of 26% since FY09, and net profit after tax of NZ$74.6 million, representing a growth of 89% on FY17. SM1 have a significant opportunity with category size and growth including:

The company also stated that it is a leading exporter of high-value infant nutrition in New Zealand, contributing 45% share of exports.

Synlait is investing in the unique, differentiated and integrated value chain (circa NZ$400Mn new capacity and capability under development in 2019).

The company also pointed that it has grown from a start-up to a 140,000 MT of annual production volume company in 11 years, with revenue growth of 26% CAGR since FY09, as shown in the picture. 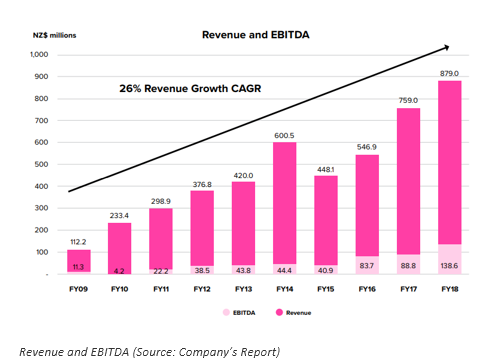 The company communicated that after a period of consolidation, the company has a strong balance sheet, which has facilitated a strong major growth phase and is currently investing over NZ$400 million in their major growth projects. SM1 also achieved a 22.7% net return on capital employed (pre-tax) in FY18.

CLICK HERE FOR YOUR FREE REPORT!
Tags:
consumer ASX: SM1
All pictures are copyright to their respective owner(s).Kalkinemedia.com does not claim ownership of any of the pictures displayed on this website unless stated otherwise. Some of the images used on this website are taken from the web and are believed to be in public domain. We have used reasonable efforts to accredit the source (public domain/CC0 status) to where it was found and indicated it below the image.