With exploration assets in Western Australia, the base metals focussed company Surefire Resources NL (ASX: SRN) seeks to focus on a rigorous approach for project development through the application of the experience of the Companyâs management team.

The Company owns multiple projects for exploration and has been actively making exploration efforts for the advancement of its vanadium project at Unaly Hill, multi-element Kooline project, along with vanadium and gold exploration at Victory Bore.

Having known the Companyâs internal strengths of such strong mineral resources for vanadium and gold, let us ponder on the industry outlook for the mineral and resources sector.

According to the Government stats, Australiaâs resources of critical minerals such as vanadium, lithium, cobalt, manganese ore, tungsten and etc., all rank in the top five globally.

The Resources and Energy Quarterly (REQ) for September 2019 states that while the trade tensions have led to a weaker outlook for Australiaâs base metal (a common metal that is not considered precious and includes aluminium, copper, lead, nickel, tin, zinc) and energy exports, Australia is benefitting from the investorsâ flight to safety as the worldâs 2nd largest gold producer. 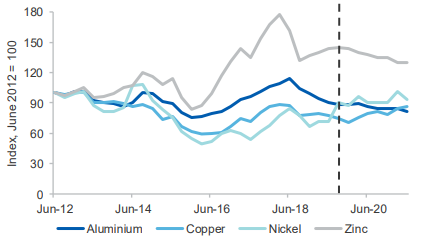 Moreover, the impact of escalating US-China trade tensions is expected to be set off by the growth in the earnings from gold export and the depreciation of the Australian dollar.

More generally, with the fall in the US dollar commodity prices arising due to US-China trade tensions, the Australian dollar has also witnessed a drop, holding up the returns for the Australian resource and energy commodity producers.

According to the REQâs research, the mining investment in Australia has turned the corner, with mining companies planning to:

The research by REQ indicates significantly stronger productivity in major parts of the Australian mining sector as compared to the traditional measures, while productivity as a factor under control in globally uncertain times comes to be increasingly important.

SRN believes that its licence areas containing several magnetic anomalies are deprived of drilling and therefore plans to assess the potential that exists within them for improved resource tonnage as well as larger zones of higher-grade mineralisation.

SRN is backed by a management team with sturdy experience in resources and other areas of management.

Lately, the Company received results from the maiden RC drilling program at Victory Bore and is hopeful of the outstanding potential along the Youanmi trend to generate additional gold mineralisation and drill targets.

Moreover, additional work has been warranted for better defining these targets while also expanding the resolution of the anomalies via further geochemical sampling.