Suncorp Group Limited Announced the Resignation of its CEO and MD, Michael Cameron

Suncorp Group Limited (ASX: SUN) is one of Australia and New Zealand’s leading financial services organisations. The company today has announced the resignation of its CEO and Managing Director Mr. Michael Cameron who had Joined Suncorp in 2006.

Mr. Michael Cameron served almost four years as the CEO and Managing Director and seven years as a Board member, making a considerable contribution to the company.

According to the company’s Chairman Christine McLoughlin, Michael Cameron resignation will provide the opportunity for Suncorp Group to enhance its performance in a highly competitive and challenging external environment as it seeks to strengthen its core businesses by focusing on its customers, products and brands.

In order to ensure a smooth transition, Mr. Cameron is going to remain employed in an advisory capacity until 9 August 2019. In the interim, the company’s Board of directors has appointed highly experienced Group CFO Mr. Steve Johnston as acting CEO of the company.

Mr. Johnston is having a deep understating about Suncorp’s core insurance and banking businesses and he is very well placed to lead Suncorp and build on the Group’s multi-channel capability, said Ms. McLoughlin.

Currently, the Board is searching to identify external domestic and international candidates who will also be considered in the selection process. It is expected that the Board will announce the new CEO in the latter part of the year.

Despite operating in challenging environment, Suncorp has confirmed that its FY19 cash earnings are in line with market expectations. The company is expected to deliver its full year 2019 result on 7 August 2019.

For the half-year ended 31 December 2018, the company reported a net profit after tax of $250 as compared to $452 million in the previous corresponding period (pcp). The net profit was 44.7% lower than the pcp, mainly attributable to – 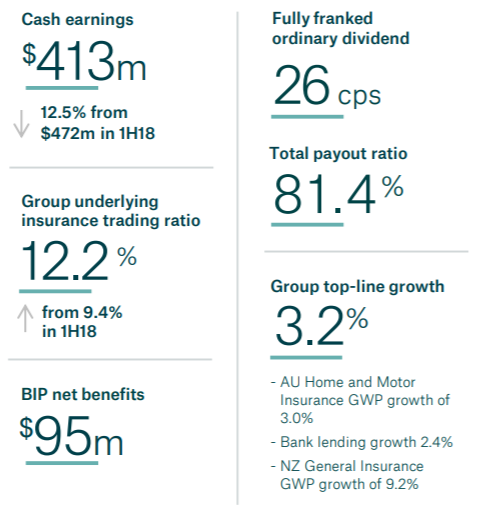 The company’s half-year results reflected solid Group top-line growth of 3.2% and besides that, during the period, the company witnessed an improvement in Insurance (Australia)’s underlying margins.