Based in Perth, Western Australia, Sun Resources NL (ASX: SUR) is an oil & gas exploration and development company, with key exploration and production assets in the US state of Louisiana. In August 2017, the company had acquired the Bowsprit lease, with prime focus on developing the Bowsprit oil project with modern horizontal wells and establishing production.

Early in the second half of 2019, the company boosted its working interest in the Bowsprit Petroleum Leases (21754 & 21787) from 50 per cent to 100 per cent, which are situated ~ seventy kilometres southeast of New Orleans in nearly three metres of water. The company is also the operator of the two leases.

According to SUR, the Bowsprit structure can be developed with one firm and a maximum of four contingent horizontal wells. Moreover, the company has determined that it could start the production using a simple unmanned production platform.

Sun Resources intends to drill the initial appraisal well to have a horizontal section of 1,500 feet in length and flow test the well, targeting the end of the first quarter of 2020. The objective of drilling the appraisal well is to prove the commerciality of the contingent resources in the 7,400’ sand, in addition to discovering and appraising the resource in the 7,400’ deep sand.

The company has secured two of the three permits required to kickstart the drilling program. More on the company’s progress with respect to securing state and federal permits can be read here.

The company is currently seeking a new partner for the project to execute a farm-out deal, targeted towards securing funding support for the drilling program. Sun Resources is using its contacts, in addition to appointing agents, to help it find a farm-in partner for the project. Discussions are underway with interested parties.

Sun Resources is focused on appraising and developing the Bowsprit project to production as rapidly as practical, with the aim of delivering return to its shareholders for their continued support as well as directing the cash flow towards funding further project acquisition in the area.

Bowsprit is a low capital expenditure, high margin, oil appraisal/development project, first oil from which is expected in 2020. 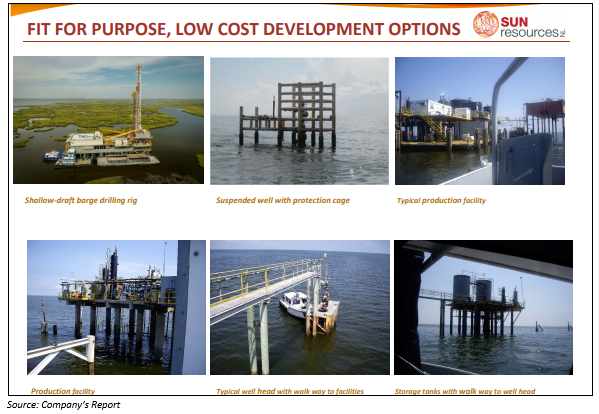 The stock of Sun Resources last traded on 15 November 2019 at AUD 0.002. The market capitalisation of the company stands at AUD 2.64 million, while the number of outstanding shares is 1.32 billion.