Strike Energy Limited (ASX: STX); an Australian Securities Exchange listed oil and gas explorer announced on 30th May 2019, that the company had secured a share placement of approximately $12 million before costs. Under the share placement, the company would issue 184,615,385 fully paid ordinary shares at A$0.065 a share to various investors, which would include 4.6 million Director participation shares; however, the issue of the shares is subjective to the approval from the shareholders of the company.

The company yesterday, on 29 May 2019, had announced the execution of a Gas Sales Option Agreement for West Erregulla, for which the company had recently received supporting geophysical evidence for successful drilling.

Strike secured the Gas Offtake with CSBP Limited, which is a substantial industrial gas user in Australia, to take up to 100 petajoules of gas produced from West Erregulla. The company granted, CSBP the option to take the gas, which belongs to the Strike’s share in West Erregulla.

Under the Key terms of the agreement, Strike had granted the CSBP Limited an option to take 80 petajoules to 100 petajoules of gas from West Erregulla, which is to be delivered on a maximum rate of 25 terajoules a day from the commencement of the production from the prospect.

CSBP would pay $5 million by 30th May 2019 as an option fee to the company for the offtake; however, the offtake would remain conditional over the successful result from the prospect and the company taking an FID (final investment decision) on the commercial project.

Under the terms of the offtake, the tenure provided by the company to CSBP is 7.5 years post completion of West Erregulla-2 well, after which the offtake under the term of the contract would lapse.

Apart from that, the key terms mention that the company would be liable to refund 50% of the amount to CSBP if the West Erregulla-2 well remains unsuccessful in production. The refund would be either through the cash payment or in the shares of the company.

Further, Strike had mentioned that the company plans to use the offtake amount, which it would receive by 30th May as operating capital for the delivery of West Erregulla-2 well, which is due to spud at the end of May 2019 as the company had recently secured a rig for the well. 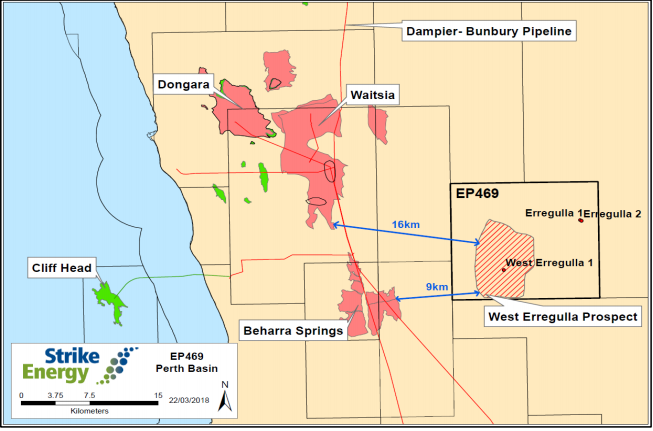 The well is designed in order to delineate the significant conventional gas targets in the kingie-high Cliff sandstones, and as per the company, there are high chances of the well to commence the production as the well contains high changes of encountering commercially recoverable hydrocarbons.

The company holds 50 percent of the tenement, which is on Exploration Permit 469 in Perth Basin and 50 percent interest in the JV tenement belongs to Warrego Energy.