Let us delve deep and discuss these announcements in detail.

On 11 September 2020, Retail Food Group’s share price rose by 4.688% to A$0.067 after the Group announced the sale of Dairy Country business. The market capitalisation of RFG stood at A$135.69 million with 2.12 billion shares trading on the ASX.

The Group specified that the transaction offers several benefits, while Fonterra, which is a key Dairy Country business partner, was a natural buyer for the business.

Retail Food Group stated that the net proceeds from the sale should be applied to the extinguishment of the working capital facility of Dairy Country (c.A$13.7 million) and an additional paydown of debt.

The sale price as per the BSA is A$19.23 million, subject to net working capital adjustments. Moreover, the offer remains subject to various conditions, including approval of FIRB. The lenders of the Group have agreed to the transaction, and settlement is expected by October 2020.

During FY2020, RFG made considerable progress in connection with the several turnaround programs employed to stabilise business performance. The Group also established a firm platform for a return to forthcoming profitability & growth. 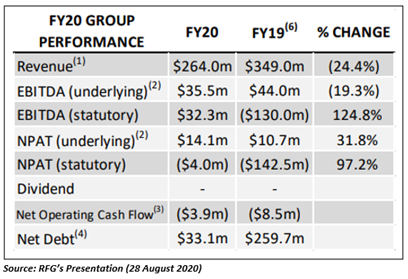 Freedom Foods Group disclosed that it had secured the ongoing assistance of its majority shareholder and principal lenders. The deal ensures access to the financial services while the Group undertakes a proposed recapitalisation.

The Group has agreed on a Standstill Deed with main lenders, National Australia Bank (ASX:NAB) and HSBC for financing facilities with those lenders. FNP stated that this standstill is effective until 30 November 2020. Moreover, it is subject to meeting certain milestones of the Company relating to the development of the recapitalisation plan.

With the support of a guarantee from an entity related to Arrovest Pty Limited the majority shareholder of FNP- HSBC & NAB have also decided to continue to ensure liquidity facilities available to FNP during the standstill period.

Freedom Foods revealed that its shares should remain in voluntary suspension for trading on the ASX until 30 October 2020. Moreover, the Group would continue to keep investors informed of material developments in accordance with its constant disclosure needs.

INTERESTING READ: Collins Foods, Retail Food Group and Freedom Foods – All That You Need to Know