Australian shares finished today’s trade slightly lower, with tech sector plunging the most.  The Australian popular ASX 200 index dropped 20.10 points to 7,128.80. Extending yesterday’s losses further, the index is down 4.24% on a year-to-date basis.

Technology sector stocks appeared to be influenced by the rough end in US markets last night. The gravity was enough to pull along most sectors in the red by market close. However, the financial sector emerged as the top gainer, pushed by the Australian big four banks.

Financials and real estate were two sectors that closed higher today. Technology sector seemed affected by social media app Snapchat’s downgraded quarterly guidance, which led to a wicked night for US stocks. Financials on the other hand remained positive, fuelled by the big four banks’ gains. 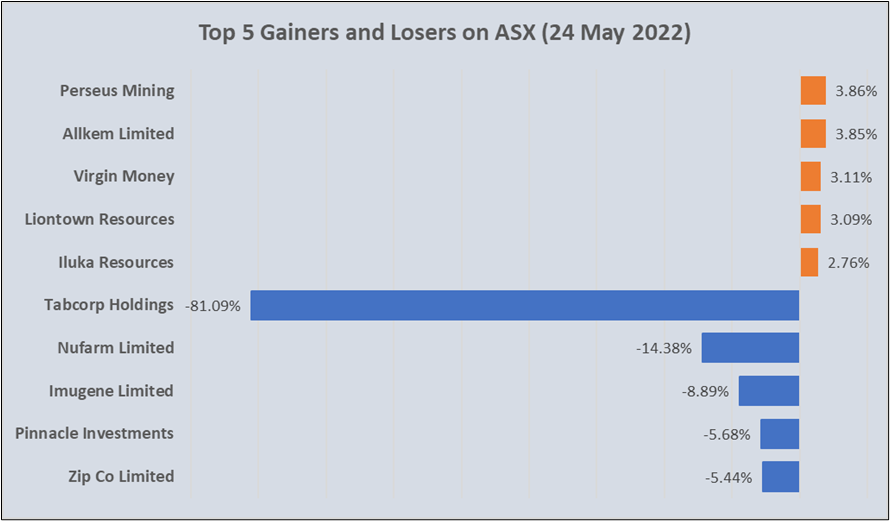 Gold miner Perseus Mining (ASX:PRU) from the materials sector gained the most from today’s trade, followed by lithium-focused Allkem Limited (ASX:AKE). On the losing end, Tabcorp Holdings Limited (ASX:TAH) from the consumer discretionary sector lost maximum. Nufarm Limited (ASX:NUF), another consumer stock was the next big loser on the exchange today.

On Asian markets side

Asian shares were edging down today, pulled down by the US tech heavy Nasdaq’s rough night. Besides, the S&P 500 futures were down 0.9%. The Asia-Pacific shares witnessed a reported trading slump. While Japan’s manufacturing activity reflected a slow growth and Nikkei fell 0.8%, Chinese blue chips were down 1.1%. despite promises of stimulus.

Oil prices remained down on worries of a possible global recession and China’s Covid-19 related curbs. The negative sentiments outweighed the demand upsurge expected from the US summer driving season and Shanghai's reopening. Adding on to pressures are global oil supply crunch, alongside green energy burdens.