On 3rd July 2020, SUDA declared a one for one Entitlement Offer of fully paid ordinary shares, together with one option for every three new shares issued with an exercise price of $0.05 and an expiry date of 31st July 2022, to raise around $3.56 million.

SUDA has recently informed that its Entitlement Offer, which closed on 29th July 2020, has been strongly supported by its stakeholders, encompassing institutional shareholders. The Company obtained robust support from its existing shareholders prior to its announcement concerning receipt of TGA’s (Therapeutic Goods Administration) approval for its ZolpiMistTM product.

SUDA attained applications for entitlements and additional top-up shares worth $5.2 million from its shareholders and consequently scaled back top-up applications regarding the Entitlement Offer.

SUDA has raised $3.56 million (before costs) via the Entitlement Offer and will now issue ~142.25 million shares and 47.4 million listed options in line with its Prospectus calendar. The Company mentioned that these new securities under the entitlement offer are likely to be issued on 5th August 2020 and the new options will be listed under ASX code SUDOE. 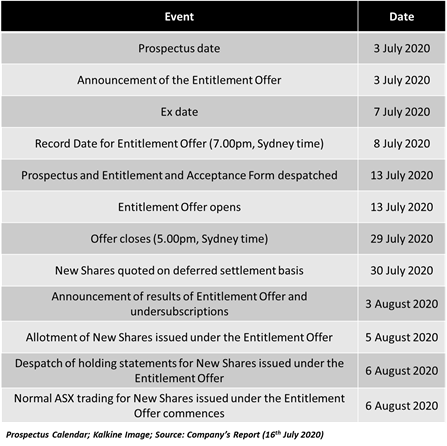 According to SUDA, the funds raised from the Entitlement Offer will be used for the following purposes:

The lead manager, Baker Young, obtained bids surpassing $3.4 billion in preparation for any shortfall that may have occurred for the Entitlement Offer.

Owing to the tremendous demand, SUDA has planned to place an additional ~21.3 million fully paid ordinary shares at $0.025 per share price to raise further $533k to sophisticated investors (Placement). SUDA will utilise proceeds raised from the Placement to enhance its working capital.

The Company added that the exercise price of its Listed Options (SUDOD), carrying an expiry date of 30th June 2021, has now reduced to $0.37. 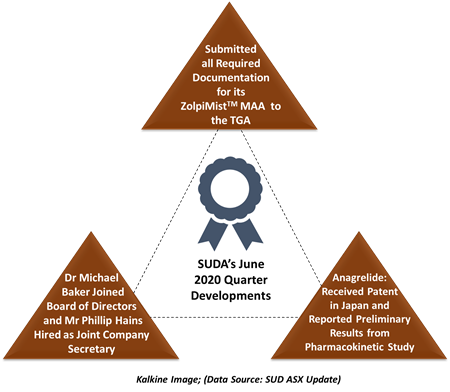 ZolpiMistTM: SUDA submitted all required documentation for its ZolpiMistTM Marketing Authorisation Application (MAA) to the TGA during the quarter. Additional documentation was lodged in response to the strategic decision taken by the Company to register a supplemental active pharmaceutical ingredient (API) supplier and manufacturer which required an amendment to the TGA submission.

Anagrelide: In May this year, the Company announced two important developments concerning its product, anagrelide, which is being created for the treatment of specific solid tumours where patients have high platelet levels.

The Company notified about the market about the grant of its anagrelide patent in Japan and revealed preliminary results from a pharmacokinetic study gauging novel mouth spray formulations of anagrelide. The study conducted at leading contract research organisation, Covance Inc., Harrogate, UK, evaluated the bioavailability of anagrelide in three formulations relative to the tablet form of drug. The final report from pharmacokinetic study is likely to be announced shortly.

Corporate Update: Dr Michael Baker joined the Board of Directors, effective 1st July 2020, while Mr Paul Hopper resumed his role as Non-Executive Chairman. Besides, Mr Phillip Hains from the CFO Solution was also hired as Joint Company Secretary of SUDA. 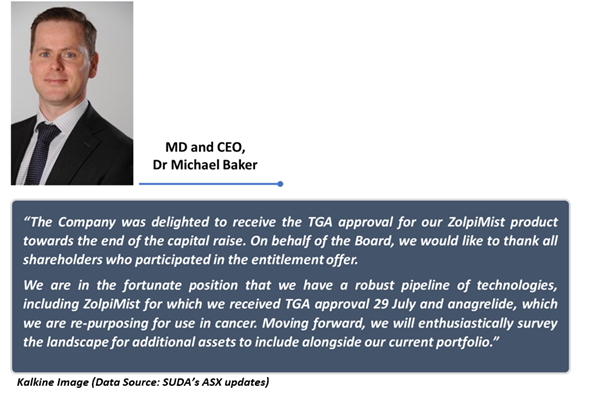