There are more than 800 fintech entities established in Australia, and the country has one of the most thrilling and vibrant fintech industries worldwide. Fintech industry has revolutionised banking and financial services sector with a digital approach and created innovative ways of interaction with consumers, which is being widely appreciated by millennials.

COVID-19 outbreak has put many fintech companies under stress due to difficulties in funding and dwindling economic environment. However, coronavirus led to a shift in payment habits of people, who have now switched to digital method to avoid human touch that takes place through currency exchange. Hence, fintech stocks have been surging in 2020.

Let’s have a look at 2 fintech stocks that have been turning the corner and witnessing a surge in their respective share prices.

As per its recent update, PPS entered into a bid implementation agreement with Powerwrap Limited (ASX:PWL) dated 9 July 2020, under which it has been projected that Praemium would make an off-market conditional takeover bid for all shares of PWL that it does not hold at current times. The offer was delivered at 26.44 cents/Powerwrap share valuing the company at $55.6 million. Each holder of Powerwrap shares would get 7.5 cents/PWL share in cash and 1 PPS share for every 2 PPS shares held.

Barry Lewin, PPS Chairman, stated that merger would complement the improved scale and substantial synergies and give an opportunity to PWL stakeholders to access PPS solid financial position and advanced technology.

Anthony Wamsteker, Chairman, PWL, stated that the offer gave an incredible chance to PWL stakeholders to take part in the positive aspect of a merged group, which will gain from substantial possible synergies. The solid consumer base of PWL and reputation of profitability, as well as advanced technology of PPS, are the benefits for Powerwrap stakeholders that are quite apparent.

PPS is Powerwrap’s largest shareholder with current relevant stake of 15.1% of the PWL Shares on issue. Hence, it believes that the possibility of a competing proposal emerging from Powerwrap shares is low. PPS aims to fund the cash part of the Offer Consideration via a $15 million term loan facility, which it lately joined in.

The merged business would offer the platform of choice to numerous Australian advisory companies, building a solid contender in high-net worth (HNW) division and wider investment platform market.

On 9 July, NWL released its quarterly business update for June 2020, reflecting that the Group had funds under administration (FUA) of $31.5 billion, as on 30 June 2020, up by 35% and a rise of $8.2 billion for FY20. This record growth in FUA was driven by record net inflows post negative market movement of $0.9 billion from its funds for this year.

Other statistics include of the followings:

FUA net inflows slowed down during March due to COVID-19 disruption, but Netwealth witnessed gradual improvement in net inflow momentum with June monthly net inflows coming back to the same levels as the preceding year. The latest Strategic Insights platform market update for March 2020 showed that Netwealth noted the biggest quarterly FUA net inflows standing at $3.2 billion, more than twice of its closest competitor.

Other highlights show that: 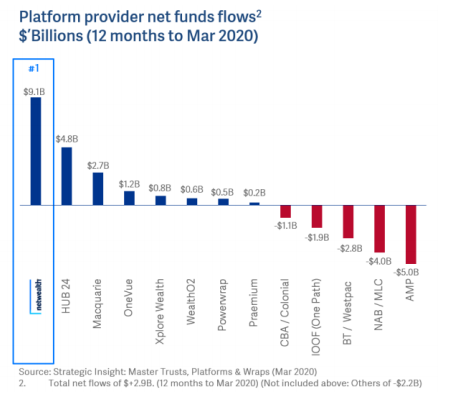 On the outlook front, Netwealth anticipates FY20 revenue to be between $116-$120 million and underlying EBIDTA to stand amid $58-$62 million, slightly exceeding the previous guidance. The current pipeline of NWL’s new business remains to be positive, and new platform pricing persists to flow via the back book with modified pricing being effective on all accounts by 31 December this year.

The Group also plans to keep on boosting investment all through FY21 to maintain its leadership in technology, service, and functionality to take advantage of substantial long-term growth opportunities. However, the outlook of the company remains ambiguous, as a consequence of COVID-19 crisis, which has made projections about the upcoming period difficult.