Australia-based company, Platina Resources Limited (ASX: PGM) advised on 13 August 2020 that all the necessary conditions for the acquisition of a 100 per cent interest in the Challa Gold Project have now been satisfied. A conditional agreement with the vendors, Corporate & Resource Consultants Pty Ltd and Bruce Legendre, to wholly acquire the project was entered in June 2020.

The Company updated that ministerial consent under s 64(1)(b) of the Mining Act for the transfer of the tenements in their first year of grant was the last condition precedent to the transaction. Now, settlement will progress with the issue of 10 million PGM ordinary shares and payment of AUD 20,000 in cash to the vendors.

Positive market sentiment seemed to have been built around the Company at the back of the significant announcement. So much so, PGM stock inched upward by 13.953 per cent on the ASX and quoted AUD 0.049 on 13 August 2020, after the market update was released. The year-to-date return of the stock was noted at more than 138 per cent.

The reconnaissance site visit to the northern end of the Challa project area found outcropping quartz veins that assayed 5.1 and 6.8 grams per tonne of gold from the rare basement geology exposed at the surface. The identified vein trends to the north-west and disappears under a thin transported top.

Planning is underway for mobilising and initiating field activities that include a soil geochemistry and low-cost Rotary Air Blast drilling program. These activities are designed to identify and test the primary targets.

The Challa gold tenements, E58/552 and E58/553, covering total area of 293km2, fall within the Murchison Domain of the Youanmi Terrane in the Yilgarn Craton. The tenements are located in-between the prolific Mt Magnet and Sandstone gold districts in Western Australia at the southwest end of the recently identified Paynesville Gold Trend, 500km north-east of Perth. 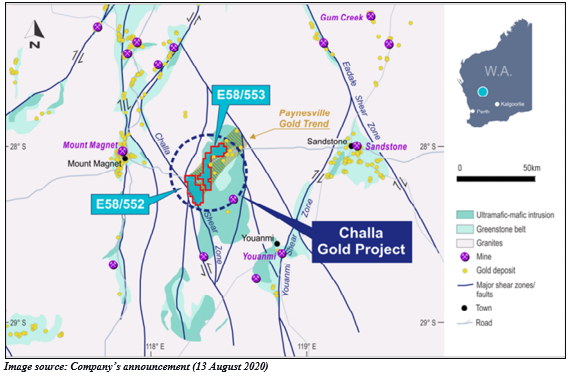 Throughout its lifetime, the Youanmi Gold Mine situated near the project area has produced 670,000 ounces of gold and the present focus is on new resource drilling of high-grade gold lodes.

Challa Gold Project is located within an area surrounded by over 50 gold occurrences, on an earlier unrecognised gold trend named Paynesville Gold Trend, which intersects and interacts with the Challa Shear, a standard Yilgarn Craton structural setting for plus million-ounce gold sediments. The Paynesville Gold Trend is the only cluster of gold occurrences within the district that hasn’t yet seen comprehensive undercover exploration and modern mining operations.

Since the 19th century, the Yilgarn Craton of Western Australia has been a prodigious gold producing province and home to several successful mining operations.