Australian-listed preclinical stage drug discoverer and developer, Nyrada Inc. (ASX: NYR) has received a significant boost to its brain injury program, with two of its drug candidates, NYX-242 and NYX-1010, being successfully delivered by the preferred route of administration in a preclinical pharmacokinetics study. The study results suggest that both the candidates have achieved durable therapeutic levels when administered through continuous intravenous injection.

This followed an important milestone in the brain injury program, with its lead candidate compounds able to cross the blood-brain-barrier in the uninjured animal brain. (ASX announcement 25.5.20)

Commenting on the significant achievement in its Brain Injury Program, Nyrada CEO James Bonnar indicated that the latest data from the preclinical pharmacokinetic study provides further evidence that the company’s lead candidates (NYX-242 and NYX-1010) can be delivered using the preferred route of administration in a clinical setting for stroke and moderate-severe TBI patients.

He also stated that the company’s anticipated dose levels were “well-tolerated with no adverse effects observed throughout the 6 hours of dosing”. The optimistic results of the study offer the company confidence for advancing both drug candidates into preclinical efficacy studies of stroke and TBI.

Stroke and TBI survivors face severe disability and often require long-term care, thereby making it a critical public health problem worldwide. As of now, there is no existing treatment for TBI and the available tPA ‘clot-busting’ treatment is suitable for less than 15 per cent.

The results confirm that Nyrada’s lead preclinical molecules readily cross into the brain and their levels at steady concentrations can be maintained above the level required for blocking calcium ion entry and accumulation in cells.

Nyrada, in a previous exploratory study, found two of its potent preclinical drug candidates to cross the blood-brain-barrier followed by single bolus intravenous injection. In the follow-up study, in a different species, separate cohorts of healthy animals were administered with a 15 mg/kg dose over 10 mins succeeded by 5 mg/kg/hr for a treatment duration totalling 6 hours.

NYX-242 was detected in the brain levels corresponding with the therapeutic IC50, while NYX-1010 far exceeded the IC50 throughout the infusion period. Nyrada, for the planned stroke and TBI efficacy studies, will adjust the dose for each drug to exceed the IC50 levels. It is somewhat higher for NYX-242 and much lower for the more potent NYX-1010. 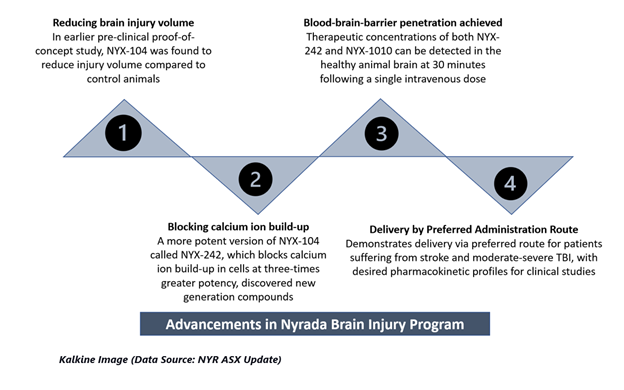 Although the continuous intravenous infusion is considered as the preferred drug delivery route for stroke and moderate-severe TBI patients, Nyrada is also performing a study with an intranasal delivery route. It can be preferred for treating mild TBI and concussion injury, common in sports. Nyrada, for stroke and TBI, plans to advance both these drug candidates into preclinical efficacy studies.