June Quarter of 2020 peppered with global impacts of the pandemic is nevertheless beating the drums for outstanding exploration activities of Musgrave Minerals Limited (ASX: MGV).  In a significant update, Musgrave announced its June Quarterly Report that marked noteworthy developments at its flagship Cue Gold project.

Following the announcement of robust quarterly results, MGV share price marked an uptick of 3.7% on 31 July 2020 to close at $0.70. The Company has noted a share-price return of over 462% and 634% in the past three and six months, respectively.

The Cue Project, situated in the corridors of Western Australia in the Murchison district, includes Break of Day, Lena and Mainland-Consols gold discoveries, along with Evolution JV over Lake Austin North.

Let us explore the critical updates that defined the Company’s exploration activities in the June Quarter of 2020.

Active Exploration at Break of Day

A large Reverse Circulation (RC) and diamond drilling program commenced at Break of Day remained in the limelight during the quarter. The program is targeted at delivering an updated JORC resource estimate for Break of Day by late Q3, 2020

Starlight lode over a strike length of approximately 100m has been defined by the drilling, and to date, it has the deepest intersect at 275 vertical metres. The Starlight lode remains open at depth.

ALSO READ: A new Shot of Bonanza Gold Grades at Starlight Adds Another Feather in Musgrave’s Cap, Stock Shoots Up 7%

A second high-grade gold lode named ‘White Light’ has been identified by the drilling, which lies 75 metres to the South of Starlight, running parallel to it. The ongoing RC and diamond drilling have confirmed new intercepts of the lode which aligns with several historical isolated gold intersections over a strike extent of >100 metres. 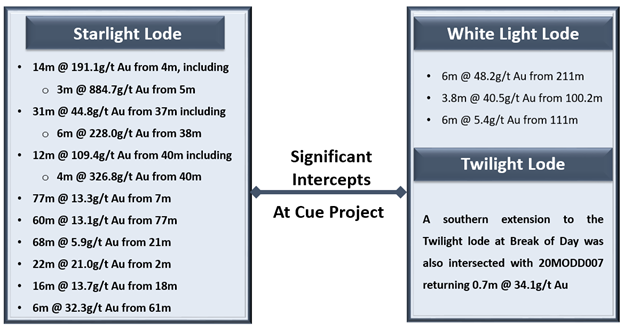 During the quarter, a large regional aircore Phase 1 drilling program over Lake Austin was completed with 249 holes drilled for 22,879 metres, as a part of Earn-In and Exploration JV. Assays for all holes have been received, with best intercepts including:

At the end of the June 2020 quarter, the Company held $9.1 million in cash. The capital raising undertaken in April 2020 via the placement of 57.1 million shares raised $6 million (before costs) from institutional and professional and sophisticated investors. The funds were raised for carrying out the drilling at the new Starlight discovery and other gold targets on the Cue project as well as for working capital purposes.

During the quarter, the Company sold 7.5 million in Legend Mining Limited shares and using the part of its proceeds exercised 10 million Legend options at 4c per option for a net gain of $634,000 to its cash position. Musgrave currently holds 12.5 million shares in Legend at total worth of $1.6 million.

Musgrave, unscathed by the COVID-19 pandemic, continues to advance its Cue Project and has developed operational procedures and plans in line with official health advice and government directives. 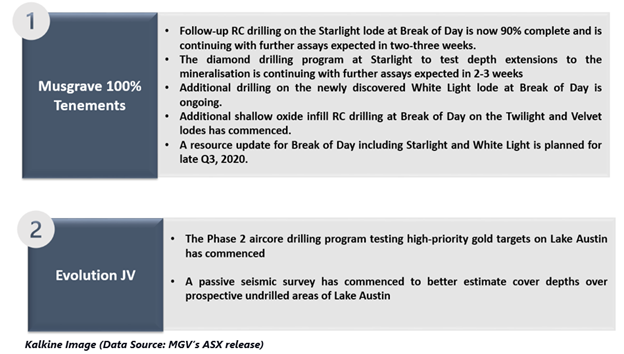