Today, the Australian market traded in the green. The benchmark index ASX 200 initially spiked, and after gaining significant points, it fell sharply towards the afternoon but later on bounced back on the track, and the strength continued towards the end. 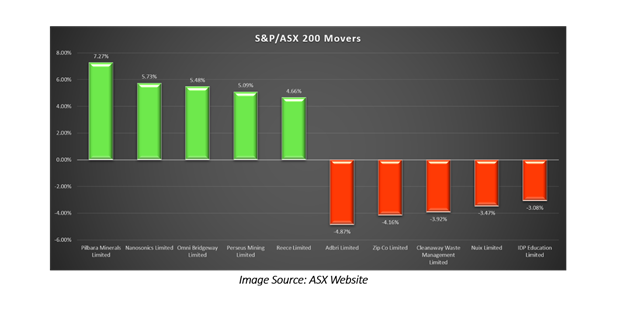 The index added 40.20 points and traded at 6926.10, up by 0.58% on Tuesday's closure —10 of 11 sectors traded in the positive territory. A-REIT performed the best, followed by Energy, Health Care, IT, Consumer Discretionary, Consumer Staples, and others. The top gainers and worst performers are from different sectors today.

A look at the other Asian Markets today

On Wednesday, Asian shares jumped to a three-week high on the back of recovering global economy and the dollar declining to a two-week low. Investors are waiting for the upcoming earnings season for further economic growth. The IMF raised its global growth forecast from 5.5% to 6%, reflecting the positive US economic outlook.

MSCI's broadest index of Asia-Pacific shares outside Japan went as high as 697.01, levels last . seen on March 18. It was up by 0.3%. South Korea's KOSPI gained 0.5%, and Japan's Nikkei also traded higher.

Chinese shares were weaker as the bluechip CSI300 index pulled the shares down. After a strong rally last week, the index dipped by 1%.

Environmental Clean Technologies Limited (ASX: ECT) has received binding commitments to raise AUD 1.5 million. The fund will be raised under the Placement by issuing 1,500,000,000 fully paid ordinary shares to the professional and sophisticated investors at an issue price of AUD 0.001 per Share. Furthermore, the company will issue one free attaching listed option for every three shares issued under the Placement subjected to shareholder approval. The terms will be the same as for the existing listed options on issue. The company will undertake SPP to raise additional AUD 2 million. Shares plunged by 25.000%.

The GO2 People Ltd (ASX:GO2) entered into a Share Purchase Agreement to take over 100% shares in Skill Hire Australia Pty Ltd. The transaction is expected to finalised after shareholder approval. The strategic acquisition will set the stage for its future growth and offers numerous key benefits to the Group. Shares skyrocketed by 35.135%.