Scentre Group (ASC:SCG) announced its dividend update, which drew varied reactions from the stock market. The management decided to slash the final dividend to 7 cents a share for the second half of 2020. This is a 38% cut over the same dividend paid last year.

The company also reported that its cash flow earnings for the 12 months ending 31 December, 2020, are expected to be A$2,375 million and net operating cashflow is expected to be approximately A$771 million.

The corresponding stock market performance of Scentre Group was dismal as its share price went down 1.43% in a single day following the announcement. Scentre Group is currently trading lower at A$2.78 per share.

The company pointed out that the pandemic had not been too friendly to the retail sector, and thus had impacted profits.

The company works with retail and luxury brands for its shopping centres and has 42 Westfield living centres, which hold strong franchise value. These centres continued to remain operational when the coronavirus-induced lockdown restrictions were eased. 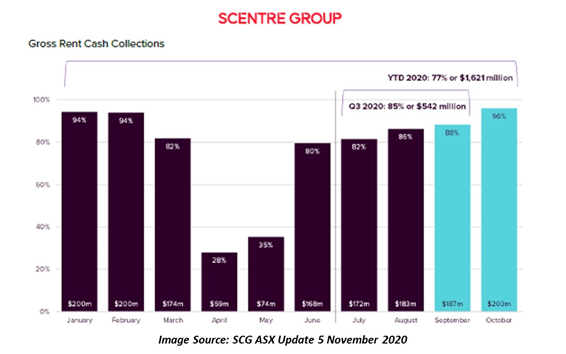 The company has experienced various changes over the past few weeks, which have not helped ease the share price drop, observed for the group. Recently, pressure from governance advocates led to Scentre Group agreeing to report on the issue of wage theft and workload of employees.

This was proceeded by Scentre going into an agreement with the Australian Centre for Corporate Responsibility (ACCR). This agreement would mandate Scentre to disclose the processes of identifying and mitigating risks in its operational chains.

The group’s director of technology, Richard Webby, also shifted to Opus to serve as the leader of the newly formed business unit, Optus Digital.