On 16 July, Eclipse Metals Limited (ASX:EPM) announced that the Australian explorer will commence an on-site exploration program at the Devil’s Elbow U-Au-Pd Project in the upcoming week beginning on 20 July 2020. The project is located in the Northern Territory (NT), which is due to open to visitors from other regions from 17 July 2020. The ground exploration for the 2020 season includes the first geological assessment of the project since 2007.

EPM has an impressive portfolio of assets prospective for gold, manganese, uranium and base metal mineralisation, with the Company’s focus on exploring the tier 1 mining jurisdictions of Northern Territory and Queensland.

The Company’s flagship Devil’s Elbow U-Au-Pd Project lies within the fecund, world-renowned Alligator Rivers Uranium Province (ARUP), accounting for ~96% of the historic uranium production and 95% of the known uranium resources of the entire NT region. The project is located almost 65 kilometres from Rio Tinto’s (ASX:RIO) Ranger Uranium Mine, the largest uranium mining operations south of equator. 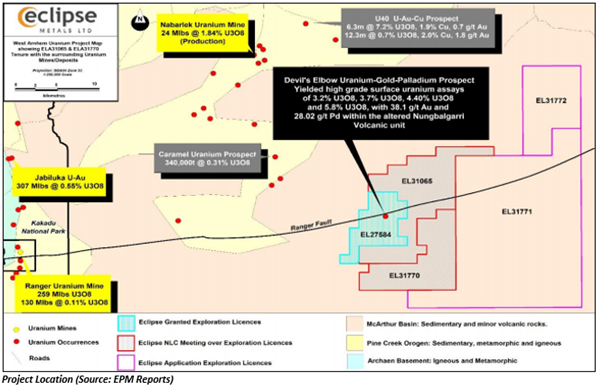 Eclipse intends to proceed towards the field exploration program following the recent granting of EL27584 tenement at the Devil’s Elbow project. The Devil’s Elbow prospect holds strong similarities with the historical Jabiluka Uranium Gold mine, which was discovered in 1971.

In April 2020, Eclipse acquired data from the historical airborne geological survey conducted by Cameco Australia and later archived by Cameco Canada. The geological and geophysical survey included the surrounding areas to the Devil’s Elbow prospect.

An initial site visit has been planned to evaluate the requirements for logistics by the ground team and drilling contractors. The program seeks to identify, locate and resample sites showcasing historical high gold, palladium and uranium samples and radiometric anomalism.

Further, holes drilled in the past will be located and precise positions will be recorded for coordinating with the recently interpreted radiometric anomalies.

Moreover, meetings with the Northern Land Council (NLC) and traditional owners have been arranged to negotiate requirements and conditions for granting adjacent exploration licences, ELA31065 and ELA31770. The adjoining exploration tenement applications include substantial prospective ground with Ranger Fault and radiometric anomalies to the east and south-east from the project.

Eclipse is progressing on discussions with drilling contractors and helicopter support firms for the upcoming exploration drilling program during the dry season in the Northern Territory.

(All financial information pertains to Australian Currency, unless stated otherwise.)