While developments around COVID-19 pandemic still appear to be ruling the movements in Australian share market, the ongoing earnings season has been dictating the market trend for the past one week.

The Australian benchmark index, S&P/ASX 200 posted a weekly gain of 1.3 per cent as August 2020 earnings season rolled in during the week. Surging commodity prices and increasing value of resources exports drove ASX 200 higher despite prevalence of pandemic-induced restrictions in Victoria.

While S&P/ASX 200 fared better over the week, the index closed the trading session 0.62 per cent down on 7th August 2020, with miners leading the losses. During the day, Insurance Australia Group Limited (ASX:IAG) and REA Group Limited (ASX:REA) caught considerable attention for their FY20 performance updates announced to the market.

The stocks of IAG and REA Group stayed on extreme ends of their respective 52 weeks’ ledger following the release of FY20 results. While IAG’s stock remained closer to its 52-week low level at $5.03, REA Group’s stock inched near its 52-week high level at $113.42 on 7th August 2020.

The stock price movements appear to be closely imitating the companies’ performances in FY20.  With that said, let us take a closer look at IAG and REA’s FY20 results for the period ended 30th June 2020: 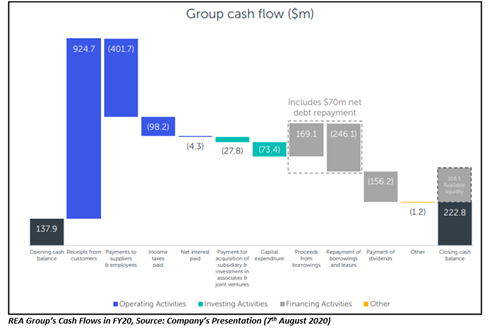 While the first half result of the Group was impacted by considerable falls in new project commencements and residential listings, the tide took a turn at the start of second half of FY20 with an improvement in national residential listings led by Sydney and Melbourne. However, COVID-19-driven effects emerged in mid-March 2020, knocking down the real estate market in April and May.

As coronavirus restrictions eased in June 2020, the real estate market staged a revival, with new residential listings soaring by 11 per cent Y-o-Y.

Dividend Update: The Group has declared a fully franked final dividend of 55.0 cents per share for the half year ending June 2020, taking its FY20 total dividend to 110.0 cents per share. The total FY20 dividend has been determined based on the Group’s NPAT (Net Profit after Tax) from core operations.

IAG Notes a Tale of Two Distinct Halves in FY20

The Group witnessed Gross written premium (GWP) growth of 1.1 per cent in FY20, in line with its guidance of low single digit growth. The Group’s GWP growth stood at 0.8 per cent in 2H20 and was diminished by an estimated adverse COVID-19 shock of ~$80 million, which reduced reported 2H20 growth by more than 100 basis points. 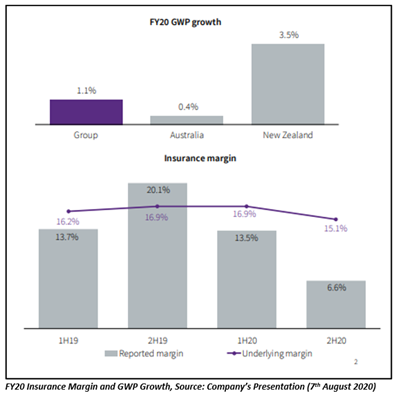 While IAG’s GWP margin was in line with its guidance, its FY20 reported margin fell outside pre-existing guidance of 12.5-14.5 per cent to 10.1 per cent. The lower margin was driven by prior period reserving, professional risks and workers’ compensation areas, higher than expected level of natural peril events and credit spread effects.

Based on interim dividend, the Group has already distributed about 83 per cent of its FY20 cash earnings to its shareholders.

Outlook: The Group observes considerable uncertainty around its FY21 financial outlook amid COVID-19-induced impacts on its business and broader economic repercussions. Consequently, the Group has not provided its guidance for FY21.

All in all, August 2020 earnings season is unfurling as a sink or swim test for market’s rally, revealing full-extent of COVID-induced repercussions on ASX-listed businesses.

Note: $ represents AUD in the article unless otherwise stated.