Calima Energy Limited (ASX:CE1) has unveiled its quarterly report for the period ended 30th June 2020, providing a summary of key activities undertaken during the quarter.

Calima is an oil & gas (O&G) player headquartered in Australia, whose principal activity is to invest in O&G exploration and production projects. The Company’s primary assets are the Calima Lands, which lie within the liquids rich gas sweet-spot of the Montney Formation in Northeast British Columbia, Canada, and the Tommy Lakes facilities and infrastructure.

The June 2020 quarter marked attainment of two significant milestones by Calima, including the finalisation of Tommy Lakes Facilities’ acquisition and completion of a resource reclassification in the Montney Formation.

Calima finalised the acquisition of Tommy Lakes Facilities in April this year, which provided the Company a cost-efficient passage to Jedney processing facility and North River Midstream pipeline. The acquired Facilities comprise compression facilities, connected pipelines and infrastructure in the Tommy Lakes Field, which is situated immediately to the north of the Calima Lands. 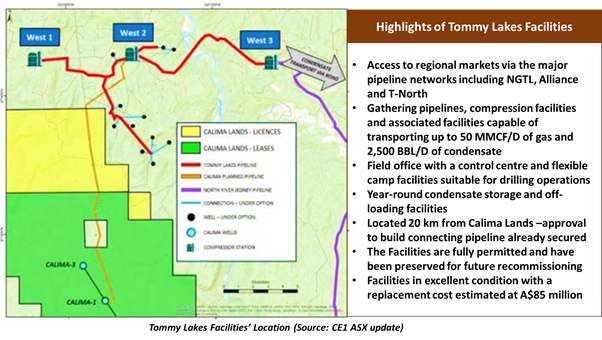 The acquisition costs, comprising performance bonds, came at ~A$850k while the annual holding costs of Tommy Lakes Facilities have been estimated at ~A$450k.

Following the acquisition of Tommy Lakes, Calima announced the completion of a resource reclassification of 248.9 billion cubic feet of gas and 12.4 million barrels of light oil and natural gas liquids of Contingent Resources from Development on Hold to the Development Pending status.

With the resource reclassification, the Company now regards a major portion of its Montney acreage as being development ready, which is subject to securing the required funding to build a tie-in pipeline. As per reporting standards, these Development Pending resources could be categorised as 2P reserves once Calima secures funding.

Other Developments in Montney Area

Calima also updated the market on a major transaction in the Montney area held during July 2020. The Company notified that TSX-listed Kelt Exploration Ltd, on 22nd July 2020, announced agreement to sell its Inga/Fireweed/Stoddart assets in British Columbia to ConocoPhillips for C$510 million.

Besides, the Company informed that ConocoPhillips would assume some specific financial obligations related to the Inga Assets in the amount of around C$41.0 million.

This transaction, along with the three acquisitions Tourmaline Oil Corp announced in Q1/2020 for C$82 million, signifies that consolidation activity is underway in the Montney.

Additionally, Calima mentioned that the Paradise well, which was shut-in on 19th March 2020 due to low oil prices, was placed back on production on 25th May 2020. The total production days since then were 30 for the period, with 1,004 barrels of oil in total.

The Company added that it forward sold C$1.2 million of net production revenue from the Paradise well for the consideration of C$1 million in March 2019 and its forward sale facility is repayable from monthly net well production over a period of three years, maturing 1st April 2022. As per the Company, the net payments stand at ~C$342k as at 27th July 2020, leaving C$858.1k outstanding.

During the June quarter, Calima made payments of A$6.2k to related parties and their associates. Moreover, the Company issued around ~9.9 million shares to Directors reflecting consulting and directors’ fees of A$37.5k, on 14th July 2020.

The Company also reported the following corporate updates for the quarter:

With a cash balance of A$3.3 million as on 30th June 2020, Calima believes its working capital position will continue to support the business beyond 2021.

Must Read! Take A Peek into Calima Energy’s Operational Objectives for 2020