The stock of diversified player, BPH Energy Limited (ASX:BPH) showed a jump  of 10 per cent to $0.022 during early trade hours following the release of the presentation on 10 August 2020, outlining geophysical and geological basis for the exploration well at Baleen drill target within the PEP 11 permit, in the offshore Sydney Basin.

Advent is in the process of preparing for drilling a well at Baleen target within the PEP 11 permit. The potential of the offshore Sydney Basin and PEP 11 permit has been highlighted in Santos 1990 study and Ampolex 1992 study, the findings of which were announced by Advent in PEP 11 literature review recently.

Must Read! Walk Through BPH and its Investees’ Positive Journey in Q2 2020

The latest presentation published by BPH identifies robust similarities between Advent’s PEP 11 project and the similarly aged structures now producing gas in Australia’s Bowen Basin. The presentation also reveals a revised drill target on seismic data line B4-18 on the Baleen prospect with a total depth of 2150 metres.

Let us quickly discuss the key conclusions of the presentation below: 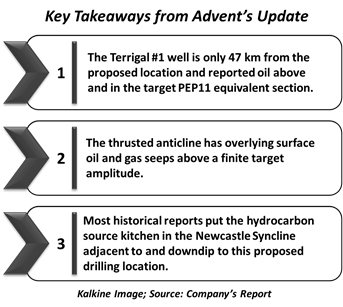 According to Advent’s update, the first offshore 2D seismic survey was undertaken in 1981 at PEP 11 permit. The 2D seismic data (2D) demonstrated that the Permian aged section of the Bowen Basin has conventional gas fields at similar time and depth to PEP11 at the Triassic/Permian age boundary that appears identical in seismic amplitude strength on regional 2D to PEP11.

The report noted  that the nearest equivalent depth/age/commercial gas-condensate fields are located to the west of Brisbane in the Bowen Basin. 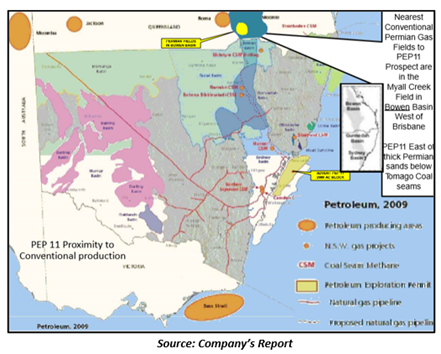 The conventional gas fields in the Permian aged section have interbedded coal and gas sands in the Late Permian that are possibly correlative to the PEP11 Late Permian target.

The Churchie/Myall Creek, a 40 BCF gas field situated to the south of Roma, Queensland, produces gas sands between the Late Permian coal seams. The coals seem to be the domestic source for conventional gas with flow rates up to 10 mmcf/d & 115 bcpd.

The update exhibited the lateral continuity of the local facies at Myall Creek that seem to be similar in depth and age to the PEP11 target. Owing to this similarity with Myall Creek, which presented robust coal impedance and weak, minor amplitude change with offset a forward AVO model was created for comparison to PEP 11 AVO, 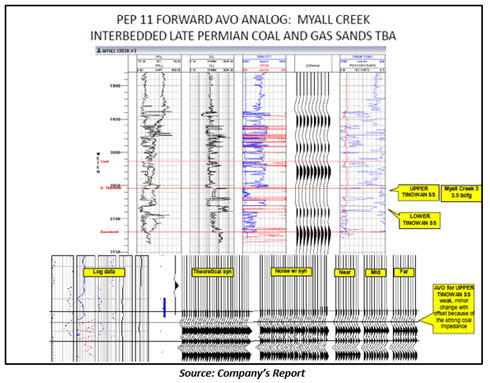 A similar AVO anomaly was discovered on the PEP 11 anticline on 2D arbitrary line B4-18 to B4-03. Located on the south west side of the Newcastle syncline sedimentary source kitchen, this anomaly is likely to be favourable for permeable sands sourced by coals akin to those at the Churchie/Myall Creek fields.

Further, the PEP 11 anticline appears to be structured by an eastward dipping thrust fault. The intersecting 2D lines indicate an extrapolated 6000-acre (24.3 km2) amplitude anomaly area that could be associated  with Late Permian interbedded coal and gas facies.

Interbedded coal beds can be the basis for the dominant amplitudes that are nearly equivalent to the overlying Late Permian coal measures.  The extrapolated 6000-acre 2D amplitude anomaly has a finite extent at or around 4400’ (1342m) measured depth.

In addition, the AVO angle gathering at the “DM1” location on line B4-18 implies that the amplitudes could be related to coal and gas interbeds with a resemblance in response to the Myall Creek forward AVO model.

The update noted that the correlation risk of anomaly location at the Triassic/Permian boundary is lowered by jump comparing the 2D PEP11 seismic data to nearby onshore Late Permian well log control using RMS velocities and conversions adjusted after a Fugro Geophysical report.

The integration of onshore well result summaries, 1991 Santos/Ampolex offshore report and a cross-section obtained from NSW government’s Digital Imaging of Geological System (DIGS) with the 2D data suggested that the possible 2D amplitude target is the onshore equivilant to the Permian Mulbring Siltstones and/or Muree Sandstones.

It is assumed that a wellbore at the “DM” location would possibly encounter thin, anticlinal Triassic Narrabeen sands below the seabed, a normal section of Permian coal measures and then enter the Mulbring/Muree with interbedded gas sands and coal measures.

Advent notified that the northern Sydney Basin holds strong petroleum potential, as reflected by the outcome of the Strevens Terrigal 1 well drilled in 1961 just onshore from PEP 11.

Their chief geologist suggested that another 10-15000 feet (3.05 to 4.6 km) of Permian facies exist below the TD of this wellbore.

The update also highlighted that the correlation from 2D seismic section west to the onshore Sydney Basin  indicates a Late Permian target below the Tomago coal Measures. Advent drilled and discovered "Permian" aged-sands in the New Seaclem 1 well at TD which also offers a relative fit for the formation target versus 2D seismic.

The gas supply crisis emerging on the east coast of Australia seems to be creating a significant opportunity for Advent to meet supply shortages with PEP 11 project. The high impact exploration project, PEP 11 permit is situated immediately adjacent to the largest domestic gas market in Australia and remains one of the most significant non-tested gas plays in Australia.

While there is no commercial production or known commercial size accumulations of oil or gas in the Sydney Basin, as stated in Santos 1991 study, the abundant shows suggest that the Basin is indeed capable of yielding oil and gas.