Early today, the index opened lower, after the major US stock indices closed on a subdued note. The fall in commodity prices also weighed on market sentiment.

On the sectoral front, seven of 11 sectors were trading in green. Healthcare was the best performing sector with 1.2% gain. Some of the other sectors that are trading higher include Utilities, Financials, Consumer Staples, energy, and Industrials.

Bucking the trend, Materials was the worst performing sector with over 2% loss. A-REIT, Information Technology, and Telecommunication Services were also among top laggards.

ASX-listed mining stocks were under stress today, owing to weak commodity prices. Shares of the Australian mining sub-index AXMM shed up to 2.5% to post its biggest intraday loss since 19 May 2021. Heavyweight miners Rio Tinto (ASX:RIO, BHP Group Limited (ASX:BHP) and Fortescue Metals Group  Limited (ASX:FMG) were all down over 2%. 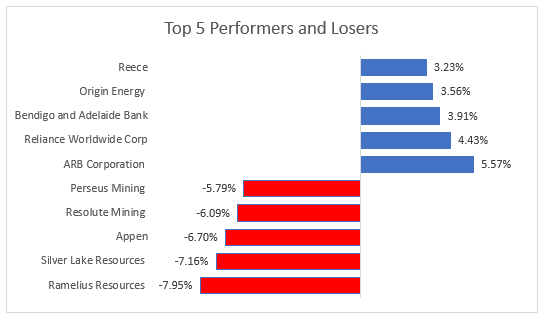 Gold miner Ramelius Resources (ASX:RMS) was the top percentage loser on the ASX with 7.95% loss.

Some of other worst performers were Silver Lake Resources (ASX:SLR), Perseus Mining (ASX:PRU), Resolute Mining (ASX:RSG) and Appen (ASX:APX), which declined in the range of 6-8%.

Automobile parts manufacturer ARB Corporation (ASX:ARB) was the top gainer on the ASX and surged 5.57%.

Some of other notable gainers were Reliance Worldwide Corporation (ASX:RWC), Bendigo and Adelaide Bank (ASX:BEN), Origin Energy and Reece, which climbed between 3-4.5%.

Shares of DroneShield Limited (ASX:DRO) rallied as much as 12.2% to 18.5 cents, their biggest intraday percentage gain since 13 April 2021, on securing new order. The drone security tech provider has grabbed a 2-year contract worth AU$3.8 million with the military of a key Five Eyes country. The company stated that around AU$2 million of total cash receipts under the contract is scheduled for the June and September 2021 quarters.

The share price of lithium and boron explorer ioneer Ltd (ASX:INR) fell as much as 19% to 30.7 cents as its proposed US plant faces green hurdle. The company in an exchange filing said that the progress of the company’s proposed Rhyolite Ridge lithium mine in the US was likely to be affected due to an environmental decision.

Anax Metals Limited (ASX:ANX) shared on Friday that it had entered into a binding royalty agreement with Anglo American Marketing Limited, a subsidiary of Anglo American Plc, for the development of the Whim Creek Project. The agreement provides for an immediate payment to ANX of AU$2.6 million in consideration of a 1% Net Smelter Return from Anax production from the Whim Creek Joint Venture. Following the announcement, the stock of ANX was trading 2% lower at 9.8 cents.

Financial research firm Citi has upgraded steel producer BlueScope Steel Limited (ASX:BSL) to "buy" from "neutral" and has hiked the price target to AU$25 from AU$22, as per the Refinitiv data. The brokerage stated BSL was building cash fast and could improve earnings through its North Star expansion, benefiting from spot steel prices surging to record highs. Boosted by the rating upgrade, BSL share price rose 1.56% to AU$22.14.

Noxopharm Limited (ASX:NOX) announced that Novartis experimental drug, 177Lutetium-PSMA-617, was all set to become an important new treatment for late-stage prostate cancer on the basis of Phase 3 clinical trial data released overnight by the company. The Company stated that then it had the chance to help grow the market for the drug and potentially radioligand therapy more broadly. As per the ASX release, the data is being presented to the Annual Conference of the American Society of Clinical Oncology (ASCO), the foremost cancer conference in the world. Riding high on the announcement, the company’s stock climbed 2.14% to 71.5 cents.

Cirralto Limited (ASX:CRO) announced on Friday that it had acquired Appstablishment Software Group Pty Ltd, Cirralto’s long-term licensing and collaborative partner. The merged entity, trading under Cirralto Limited, will utilise the software and integration framework developed by Appstablishment, coupled with its own payment technology, in order to improve business efficiency while providing access to increased payment options so they can get paid quicker and better manage their cash flow. The stock of CRO was trading 0.84% higher at 5.9 cents.

Taiwan’s Weighted Index was the worst performer in the region, falling 0.8%. Hong Kong’s Hang Seng was also down 0.4%.

In a similar trend, China’s Shanghai Composite was trading 0.2% lower.

The cryptocurrency markets remained in recovery mode, with major crypto coins continuing to regain ground after mid-May crash. Investors opted to hold digital assets over bonds in an inflationary environment.

Ether, the second-largest crypto, has gained 1.65% in the past 24 hours to trade at US$2,725. However, the Ether’s daily trading volume on exchanges was higher than Bitcoin’s, as per CoinDesk Research report. This new trend indicates that investors are looking at Ether over Bitcoin as a better future prospect.

Bucking the trend, the meme currency, Dogecoin, has dropped 8% to 37.9 US cents in the last 24 hours. On Thursday, the Shiba Inu-based token had rallied as much as 25% after Coinbase, a US-based crypto exchange, said that it would list the coin on its platform.