Spheria Emerging Companies Limited (ASX: SEC) offers investors access to an actively managed portfolio, which majorly comprises Australian Small Cap Securities. The company’s portfolio is constructed to invest in a select number of small and micro-cap companies listed in Australia and New Zealand. Its investment strategy aims to provide total returns in excess of the Benchmark and capital growth.

The company recently announced an on-market buy-back of 66,337,546 fully paid ordinary shares for the purpose of capital management, as the share price was trading in excess of a 10% discount to the last disclosed pre-tax Net Tangible Assets per share.

Through the on-market share buy-back, the company has planned to purchase shares for a total consideration of $5 million during the 12 month period from 1st July 2019 to 30th June 2020. This is in accordance with a clear commitment to shareholders that an action shall be taken by the Board when the share price trades away from the Net Tangible Assets. To ensure that the buy-back does not significantly reduce the capitalisation of the company, hindering its growth over time, the Board may consider undertaking a placement of company shares from time-to-time. 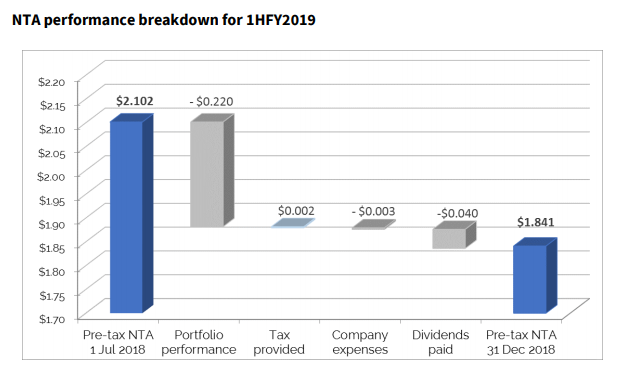 The company outperformed its benchmark by 2% despite the challenging conditions during the period. The company’s NTA declined by 10.7% after the adjustment of the dividend paid as compared to a decrease of 12.7% in the benchmark.

The company’s portfolio performance as at 31st December 2018 was depicted in terms of three perspectives as explained below:

Let’s look at what Net Tangible Assets are in a bit of detail.

Net Tangible Assets per share is computed by dividing the value of net tangible assets by the outstanding shares of the company. The value depicts the amount of money that each shareholder would receive of the company were to liquidate.

The ratio is an important factor in designing the investment strategy as it helps determine if the share price accurately reflects the net assets of the company or whether a company is undervalued or overvalued. It serves as a useful measure when conducting a comparative analysis of the companies within the industry as there can be a different value of net tangible assets per share for different industries based upon the amount of intangible assets attached. For instance, the value of intangible assets for a company operating in the software industry will be much higher than that of an Auto manufacturer.