According to the Government of Western Australia, China was the world’s largest producer of rare earths (71%), graphite (68%) and vanadium (54%) in 2018, and a major producer of all other battery minerals. Moreover, the global economic growth and increased intensity of use of vanadium in steel and emerging vanadium redox batteries (VRBs) is expected to drive near term growth in vanadium demand. 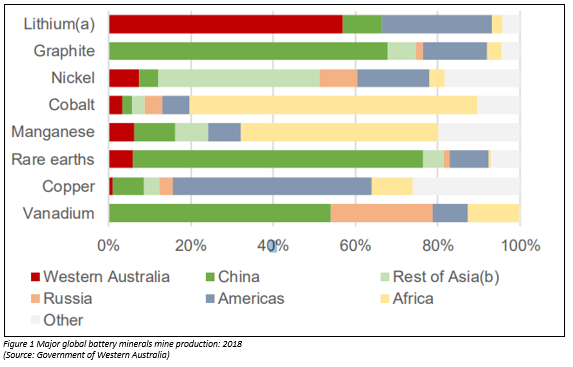 Western Australia, which accounts for the largest lithium production at the global level, also holds the 4th largest vanadium and manganese resources.

Surefire Resources NL (ASX: SRN) is a base metals focussed company that has ample exposure to this lucrative opportunity, owning exploration assets for vanadium in Western Australia. The company operates in the region seeking to target an extraordinary opportunity in base metal exploration while developing its projects. 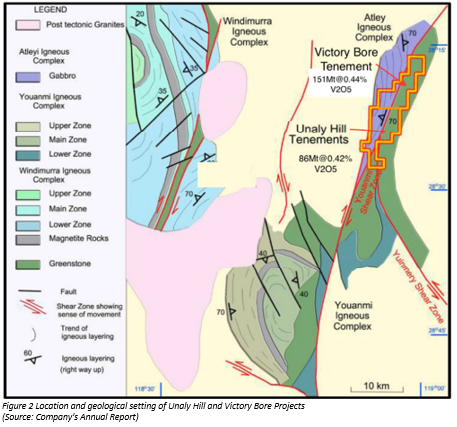 Geological Composition of the Projects

SRN completed a drilling programme at the Unaly Hill project during the year ended 30 June 2019, intended to test additional magnetic anomalies identified along strike of the already established JORC Inferred resource of 86Mt @ 0.42% V2O5, with the below attributes:

The drilling shows that, in accordance with the aeromagnetic data, the mineralisation at Unaly Hill remains open for a considerable distance along strike from the previous drilling.

To learn more about the other developments in the process of RC drilling, READ: Surefire Victory Bore RC Drill Results Out.

In addition, SRN evaluated and budgeted an in-fill drilling programme designed to delineate a JORC Indicated Resource within the current inferred resource at Unaly, while the planning for the advancement of the project to a scoping study is under pipeline.

The metallurgical test work was dedicated on the salt roasting process, which is a frequently used procedure for processing the vanadiferous titanomagnetites to recover vanadium from the ore.

The test work looked at the effects of grind size on mineral liberation and magnetic separation and addressed the parameters of comminution and physical characterisation, mineralogy, magnetic beneficiation and salt roasting.

The advanced test work programme successfully achieved a 192% to 367% vanadium upgrade with V2O5 concentrate grades up to 1.43%, showing consistent vanadium grades and recoveries across the three mineralised zones tested.

The acquisition of the Victory Bore vanadium project in April 2019 significantly increased Surefire’s vanadium resource base and exploration potential, making it one of the largest vanadium resource holders in Australia. The combined Inferred Mineral Resource for SRN including Unaly Hill vanadium project and Victory Bore Vanadium Project was estimated at 237 Mt grading ~0.42- 44% V2O5 with a contained V2O5 content of 102,900 tonnes.

The magnetic anomalies within both licence areas have the potential for not only an increased resource tonnage but for larger zones of higher-grade vanadium mineralisation as well.

SRN had previously established a significant JORC vanadium resource at Unaly Hill from drilling 3km of magnetic anomaly corresponding with the cumulous magnetite layers within the intrusive.

Rarely found metal, Vanadium has primary utility in the steel industry for metal alloys like high-speed tools, titanium alloys and aircraft. However, the rapidly developing energy storage (battery) sector has significant utility for vanadium with the expanding use and increasing penetration of the vanadium redox batteries (VRBs), which use the unique ability of vanadium to exist in solution in four different oxidation states to store energy.

A reduction in global feedstock capacity on the supply side and the declining global inventories along with several other international uncertainties have caused the global vanadium price to rise. Having such positive prospects, SRN can be a significant player in the vanadium market, globally.