Saracen To Acquire Superpit Gold Mine, and Replace Barrick Gold in KCGM JV With Newmont

Saracen Mineral Holdings Limited (ASX: SAR) emerged as the cash-rich miner to aim for the Superpit Gold Mine- a prominent gold mine in Australia jointly held by the two international behemoths Barrick Gold Corp and Newmont Gold Corp.

Newmont is the current operator of the Superpit Gold Mine in Kalgoorlie, Western Australia; and, Barrick Gold currently intends to own the mines, which they can operate to enhance the operational portfolio.

The plans of Barrick Gold led the miner to open the Superpit Gold Mine for the cash-rich Australian gold miners, and while the market contended for many cash abundant miners, especially Newcrest Mining Limited (ASX: NCM) amid its bumper margins from the Cadia operations, Saracen happened to be the Australian miner to acquire the Superpit Gold Mine.

To get acquitted with the background of the proposition of the Superpit Gold Mine, and about the market speculation over the acquisition, Do Read: Barrick Gold to Offload its Kalgoorlie Superpit Stake; Cash Rich Australian Miners in Focus

Saracen notified the stakeholders of the company that the miner entered a binding sale agreement with Barrick Gold to acquire the 100 per cent interest of the behemoth in the Kalgoorlie Consolidated Gold Mines (or KCGM) a Joint Venture between Barrick Gold (50 per cent) and Newmont Corp (50 per cent).

Saracen would take the 100 per cent Barrick Gold’s interest for a price of USD 750 million to get a 50 per cent stake in the Superpit Gold Mine, which is a large, high-quality, long-life open-pit and underground gold mine in the gold hub of Australia.

To know why western Australia is regarded as the gold hub, and where the Australian gold industry is heading, Do Read: ASX Gold Stocks At The Brim Of The Rejuvenating Gold Industry In Australia

A Glace Over the Superpit Gold Mine

The Superpit Gold Mine is among the largest gold mines in Australia amid its significant resources and presence in the Tier-1 mining jurisdiction. The Superpit mine is currently being managed by the Kalgoorlie Consolidated Gold Mines Pty Lt, and the operatorship of the mine is with Newmont Corp.

The on-site operations are Fimiston Open Pit and the Mt Charlotte Underground Mine. The processing unit, which currently holds the processing capacity of about 13 million tonnes per annum is composed of two crushing circuits, which supply coarse ore as a mill feed stockpile, two milling circuits, two flotation circuits and three carbon-in-leach circuits.

SAR Cash Growth and Advantage of the Acquisition

Saracen has witnessed a steady growth in the cash over the years, which strengthen the roots of the company for the acquisition of the Superpit Gold Mine.

The acquisition of the Barrick Gold’s interest in the Kalgoorlie Consolidated Gold Mines Joint Venture serves many advantages to the miner such as exposure to significant mineral resources, a stronghold in the eastern fields of Western Australia, a partnership with a successful global miner-Newmont, etc.

The NI 43-101 deposits at the Superpit Gold Mine holds significant Mineral Resources of 11.7 million ounces with Ore Reserves of 7.3 million ounces.

The increase in resources could also boost the reserves based valuations such as EV/ Reserves, EV/ Resources, etc.

The Carosue Dam operations of the company are currently at the eastern fields of Western Australia, and the additional exposure of the Superpit supports the stronghold of the company.

The binding agreement entered by Saracen also brings the expertise of a large global scale gold miner- Newmont, which holds a strong track performance of the KCGM JV. The structure of the JV upon the completion of the agreement would be as below: 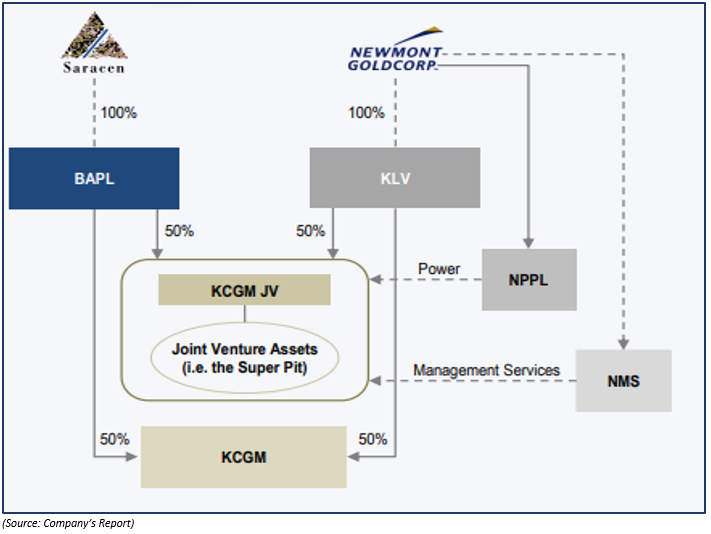 The price cost for the proposed acquisition, i.e., USD 750 million or $1,100 million would be funded by the company via;

The company would also utilise the existing cash and cash equivalent position of $196 million along with the undrawn working capital facility of $45 million.

To further strengthen the stance of the company for the agreement, SAR inked a credit approved commitment letter with the Westpac, the European giant- BNP Paribas, and the Citibank. The credit commitment would provide the company with a $450 million Term Loan along with a three-year $45 million revolving corporate facility and a $5 million contingent instrument facility.

The Institutional Placement would be underwritten by RBC Capital Markets and Goldman Sachs on 50:50 per cent basis and would include an issue of 125.0 million new fully paid ordinary shares at an issue price of $2.95 per unit.

The issue price along with the numbers would raise about $369 million and would also mark a 13.0 per cent discount to the closing price of the company’s share on 15 November 2019 ($3.39). Also, the placement is under the placement capacity of the company and would not require the approvals from the shareholder.

The Entitlement Offer, which would give the existing shareholders an opportunity of 1 new share for each 5.75 existing ordinary shares, would comprise of 144.9 million shares at an issue price of $2.95 apiece, which would raise a total proceed of $427 million.

The Entitlement would be further divided into an Institutional Offer and a Retail Offer with a timeline as presented below:

The completion of the binding agreement is subject from the approval from the Western Australia Minister of Finance, Aboriginal Affairs and Lands.