In February 2019, the company released its half-year results for the period ended 31 December 2018. As per the companyâs half-year release, earnings of AUD 7.73 cents per unit was up by 17% compared with prior corresponding period, mainly due to the independent revaluation of Kerarbury almond orchard caused an increase of $15.6 million or 10% to the previous value coupled with acquisitions, sale of unleased annual water allocations resulted in higher income as well. Also, distributions per unit (DPU) of 5.22 cents was up 4% against prior corresponding period, and pro forma gearing of 33% was in line within the target of 30-35%. 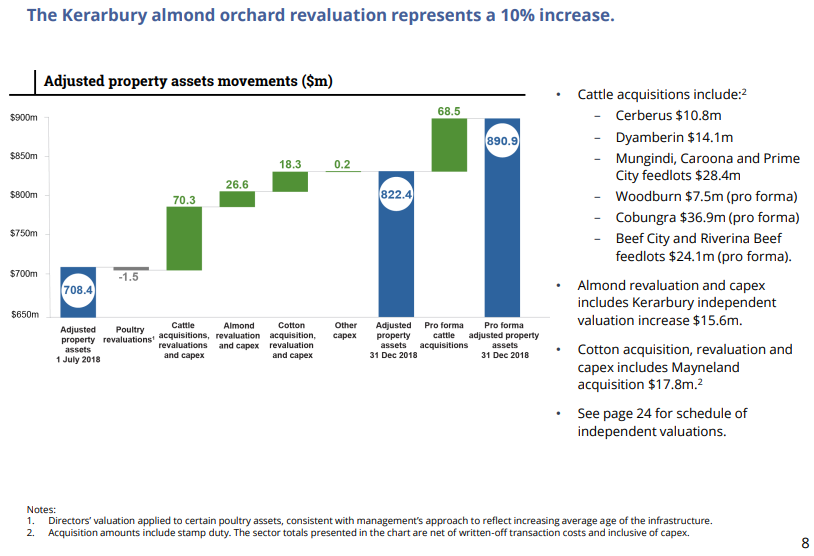 The company notified about the acquisition of four additional cattle properties & one cotton property, which were funded from the balance sheet capacity of RFF. Reportedly, all cattle property has productivity development potential and accompanying leases with ten-year terms along with a market rent review in the fifth year.

Rural Funds Group is a constituent of S&P/ASX 300, and its portfolio includes diversified high quality Australian agricultural assets. RFFâs invests in assets to produce stable income from leasing assets to suitable industry participants along with capital growth by the appreciation in the value of those assets. Rural Funds Group (RFF) is managed by its responsible entity, Rural Funds Management Ltd (RFM).