Rhythm Biosciences Limited (ASX: RHY) is an ASX listed healthcare company which is developing a diagnostic tool for the early detection of colorectal cancer, which causes high mortality rate. It has its lead product, ColoSTAT®, a simple and low-cost blood test, that helps to detect bowel cancer at an early stage. It is anticipated to be compared to the faecal immunochemical test (FIT), at a lesser cost. It has the potential to reduce the morbidity and mortality rates with lower costs.

On 22nd May 2019, the company announced that its Quality Management System (QMS) had been granted with an International Organization for Standardisation (ISO) certification. The British Standards Institution (BSI) Group, a market leading UK Notified Body and the business standards company had conducted the assessment.

International Organization for Standardisation (ISO), was established in 1946 with twenty-five member nations. ISO is an independent entity, with operations on a global scale with one hundred and sixty-four national standards bodies. The primary aim of ISO is to bring the skill and knowledge of its member countries to develop market-relevant standards which would be relevant on the international level for all its members.

The standards give a benchmark specification for products, services and systems which helps to ensure their quality, safety and efficiency.

The company has been certified with EN ISO 13485:2016, which is a standard that measures the quality and ensures the consistency in various stages of the product cycle like designing, production, storage and distribution of medical devices that are not harmful as per the intended use.

Global Harmonization Task Force (GHTF) also recognises this above- mentioned certification. Securing the certification is a major milestone for the company’s pathway to market and the first step in achieving compliance with European and Australian regulatory requirements.

Certifications like this would portray the company as the one adhering to the laws and regulations. Also, RHY could be classified as the manufacturer of In Vitro Diagnostics and Medical Devices for its own and products and in-licensed products for global registration and sale.

The company’s CEO, Glenn Gilbert, stated that this certification is another step towards developing and commercialising its ColoSTAT® screening and diagnostic test. 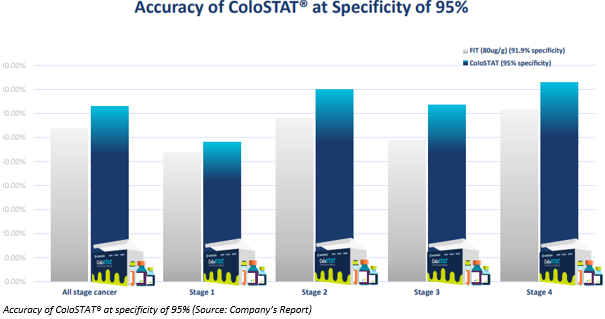 On 30th April 2019, the company released its March 2019 quarterly update. Some of the highlights from it are as follows:

The company used a total of A$738,000 million for operating activities, and only A$7,000 had been used towards investing activities. The financing activities led to a total cash outflow of A$33,000. At the end of the year, the company had net cash of A$5.64 million in the balance sheet.