Restaurant Brands New Zealand Limited (ASX: RBD) manages multi-site branded food retail chains. It has more than 9,000 workers throughout New Zealand, Australia and Hawaii. It caters to almost 120,000 customers globally per day. The company was founded in 1989 in Auckland, New Zealand and acquired KFC in 1989 and Pizza Hut in 1995. In 2017, Restaurant Brands also purchased 100% of the shares in Pacific Island Restaurants Inc. 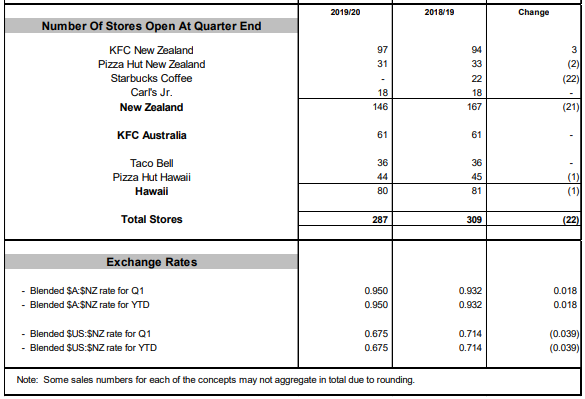 The total sales for the first quarter of FY20 amounted to $182.8 million, which depicted an increase of $2.8 million (1.6%) in comparison to the previous corresponding period. The same-store sales growth of operating divisions at different locations was as below:

The total number of stores went down to 287 (decreased by 22 as compared to the previous corresponding period), owing primarily to the sale of Starbucks Coffee stores. 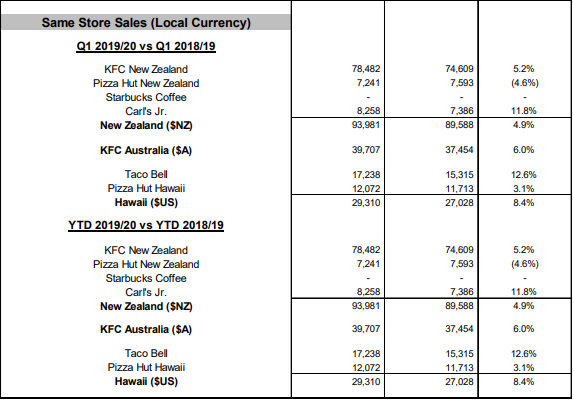 New Zealand â Operations in the division produced sales amounting to $96 million, reporting a decrease of 1.5% on an aggregate basis owing to the sale of the Starbucks Coffee business. While the total sales went down, sales on a same-store basis went up by 4.9%.

Australia â The KFC outlets generated sales of $NZ42.8 million, which remained constant on an aggregate basis but grew by 6% on a same-store basis.

Hawaiian â The operations yielded sales of $NZ44 million, increasing 10.6% on an aggregate basis and 8.4% on a same-store basis.

KFC New Zealand â KFC reported first quarter sales of $80 million, up 6.7% as compared to pcp and 5.2% on a same-store basis for the same quarter.

Pizza Hut New Zealand â The Pizza Hut stores generated sales of $7.7 million, a 16.1% decrease on the prior corresponding period and a 4.6% decrease in same-store sales. The company has a total of 100 Pizza Hut stores with 69 stores being operated by independent franchisees. Sales of the Network for the period stood at $22.6 million, down by 3.1% as compared to the previous period.

Carlâs Jr â Sales for the period amounted to $8.3 million, up 9.5% in comparison to pcp, owing to the commission of delivery through UberEats platform. Same-store sales increased by 11.8%.

KFC Australia â Sales for the first quarter were $40.7 million, up 1.9% on an aggregate basis and 6% on a same-store basis with a total store count of 61.

Taco Bell Hawaii â Sales for the quarter amounted to $US17.4 million went up sharply with an increase of 8% on a total basis and 12.6% on a same-store basis backed by successful promotions. The total number of Taco Bell stores were 36.

Pizza Hut Hawaii â The first quarter sales of $US12.3 million depicted an increase of 0.1% on an aggregate basis and 3.1% on a same-store basis with a total number of stores remained steady at 44.