The discount variety retail sector player The Reject Shop Limited (ASX: TRS), headquartered in Kensington, Australia, recently announced that it is headed towards a full year net loss for the 2019 financial year. 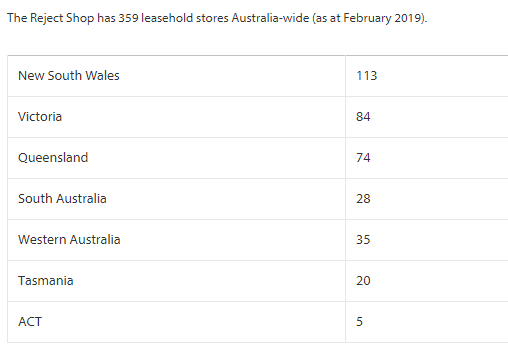 The downtrend in the company’s business performance may be attributed to the competitive trading environment in the retail sector. As a result, the total sales across the network for the second half of the year-to-date fell well below expectations (1% below pcp). The Comparable Stores Growth YTD sits at -2.7%, slightly better than the second half to date, which is -2.9%.

In addition, the company’s Gross Margins have also reduced as the benefits expected from the Sales and Merchandise related initiatives could not be delivered to the consumers. The fall in margin during the period was further heightened by the competitive pricing pressure placed on key sales departments from both the major Supermarkets and the Department Stores.

Given the current state of affairs, around seven stores up for renewal are planned to be closed by June 2019-end.

However, some non-product related costs such as store wages, occupancy costs and head office costs have all been well-controlled during the second half, with material cash reductions on rent renewals still being implemented.

Keeping up a positive outlook, The Reject Shop’s Chairman Mr Bill Stevens commented that the business continues to have confidence in long-term prospects and there will be opportunities for a new CEO to introduce a new product range that would target a broader customer base.

Reject Shop has appointed LocationIQ to review the current property portfolio and its potential future. Meanwhile, the advisory firm KPMG would be conducting a financial analysis of the business.

In its further update on 23 May 2019, the company announced that its CEO Ross Sudano has ceased to be director of the company effective 22 May 2019. He has led the company through a period of significant consolidation following a period of rapid growth in the store portfolio and has implemented a vital change program. An executive search process is underway to find a new CEO.

Ms Aquilina, who joined TRS in 2007, has more than 20 years of work experience in the retail sector, from Store Operations and then progressing onto a range of senior leadership roles including Supply Chain, Merchandise Planning, Strategy and Innovation.

Further, on 23 May 2019, the company notified the market that Commonwealth Bank of Australia and its related bodies ceased to be a substantial holder of the company effective 18 April 2019.