S&P/ASX 200 Materials (Sector) provides investors with a benchmark that reflect those companies constituting S&P/ASX 200, which are classified as material sectors and sub-industries. In the past three years, the index is up by 21.61%. 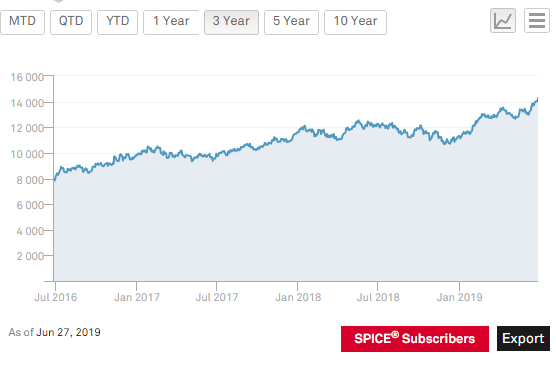 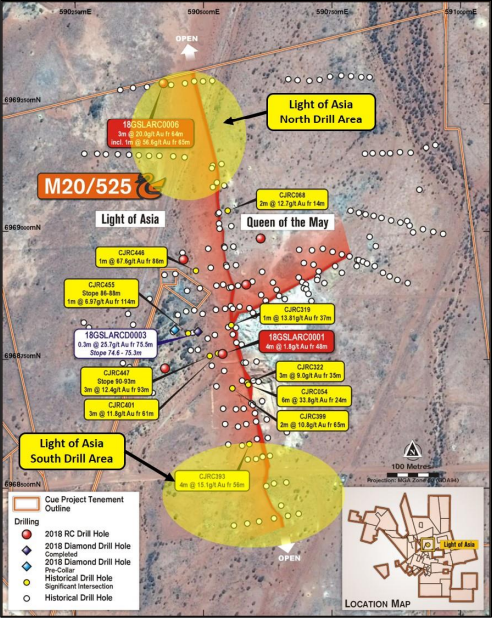 The drill program of Light of Asia North & South was designed to test the extensions of the high-gold mineralisation intersection at 18GSLARC0006 (drill hole), which hosts 3m at 20.1g/t (from 64m), including 1m at 56.6g/t. Further, the intersection is 500 metres north to the main Light of Workings, and the program also extends to the testing for strike extension of the mineralisation to the south of main workings. GSM expects to undertake 1,000m of reverse circulation (RC) drilling to target extensions of the historic high-grade workings.

A geochemical sampling program was started by the company to infill & follow up on a number of anomalies defined by the miners in the past. It was reported that GSM expects to target the similar mineralisation found at the Lancefield Mine (Prod.1.3M Oz) ~10km to the south, and assay results are expected by July.

A geochemical program would be commenced at the Cuddingwarra project located ~15Kms west of Cue Townsite. It was reported that the program targets to evaluate various untested geophysical targets, and GSM expects to complete the program early July and assay results are expected in August.

As per the release, Austar Gold collaborated with Mining One Consultants Pty Ltd to estimate a maiden Inferred Mineral Resource at the Rose of Denmark mine. Also, it is considered that the resource consists of Inferred Resources only due to the preliminary nature of the exploration and inherent uncertainties while defining the mineral structures. Further, the Inferred Mineral Resource utilised input from 2,900m of drilling from 69 diamond drill holes (ROD001 to ROD061), which were completed by the company, and five historical diamond drill holes (ROD1205, ROD1207-1209 and ROD1212) drilled in 2012. Final tonnage and ounce are below shown in the figure. 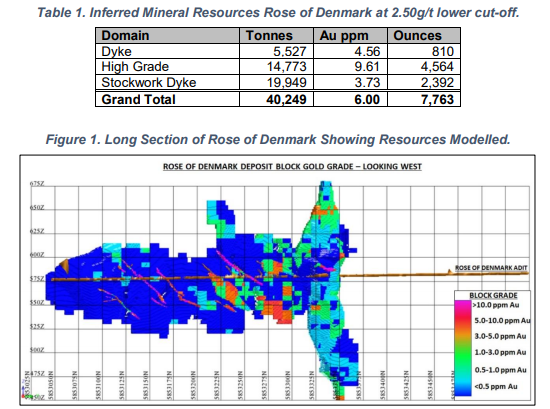 Reportedly, due to insufficient exploration to estimate the mineral resource, the exploration target is conceptual in nature, and the company expects that additional exploration might result in the estimation of a Mineral Resource. Also, future exploration would be undertaken to determine the veracity of the target, and Austar is working on exploration budgets to enable follow-up drilling in the near-term. In addition, the company mined to the depth in excess of 800 vertical metres at several dyke bulges hosted gold deposits in the Woods Point â Walhalla goldfields.

Austar Gold reported ongoing analysis would be undertaken to identify higher-grade area having positive potential, which could be extracted through the underground mining methods. Further exploration would identify the other near-mine opportunities to enhance and grow the resources identified as of now.

Reportedly, limited mining continues at the gold-bearing structure above the Rose of Denmark adit, which would allow more enhancement to the geological structural model of deposit; meanwhile, it would produce additional mil feed for the morning star process plant. In addition, the company is engaged with Victorian EPA for the discussions of a formal discharge permit approval process for the most appropriate form of water treatment process on the site. Importantly, additional tests and studies are underway, which would allow the company to apply for a formal mine work plan required for unlimited mining via an unconventional decline.

According to the 28 June 2019âs announcement, Ora Banda has 485,719,962 shares on issue, and out of these shares on the issue 114,540,262 of these subject to voluntary escrow. Further, the details of the capital structure are below, which had been detailed in the announcement dated 26 June 2019. 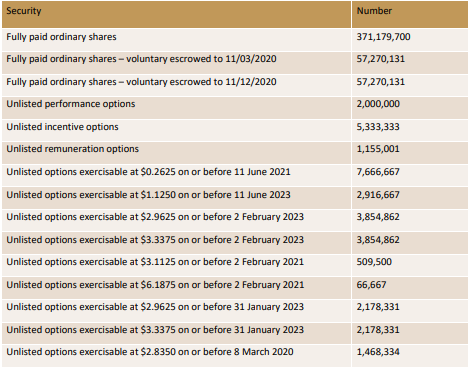 It had been reported that work on the ground was commenced, and core samples from several previously drilled holes at the high-grade Waihi area were not assayed while drilling due to funding constraints. Currently, the core samples are at the assay laboratory for analysis, and the assay results are anticipated in the coming weeks.

As per the release, the balance sheet of the company is strong now that is free of all debt and creditor claims. Currently, the gold prices are at near record highs (+A$2000/oz) â Ora Banda is very well capitalised with 15 million in cash to progress in the planned resource drill out, definitive feasibility study and regional exploration program.

The company released a presentation for the general meeting held on 7 June 2019. According to the presentation, a group of supportive stakeholders that includes shareholders, creditors and New Board would provide a clean de-risk start for the company. Ora Banda would focus on capitalising on the strategic and prospective landholding through detailed mine planning and exploration & resource definition. Furthermore, the company would target a robust Definitive Feasibility Study (âDFSâ) to underpin future project development, which is expected to complete by 2H 2020 â it would be first opportunity to optimise the ore delivery schedule and maximise cash flow while ensuring strong and de-risked foundation.

According to the presentation, the companyâs major secured creditor and key financier, Hawkeâs Point Holdings I Limited proposed the Deed of Company Arrangement (DOCA); subsequently, creditors voted in favour of DOCA in February 2019. Furthermore, all claims and debts existing against the companyâs pre-administration were extinguished on DOCA completion. The settlement included a payment of $13.3 million in cash, from proceeds of the proposed Capital Raising and an issue of 1,393 million shares (pre-consolidation basis). On 28 May 2019, the company had announced the completion of $30 million capital raising, and the control over the company was returned to the Directors.

On 30 April 2019, the company announced a capital raising plan to raise in the range of minimum $30 million to maximum $40 million, which was sufficient for the company to be debt free and well-funded for the strategy. According to the presentation, the capital raising comprised two aspects an Entitlement Issue and Converting Note. Also, the entitlement issue aimed to raise ~$7.6 million while the converting note issue aimed to raise the aggregate of $30 million to $40 million. Furthermore, the offer price and conversion price was 1 cent per share (a pre-consolidation terms), which was similar for the entitlement issue and converting note issue.