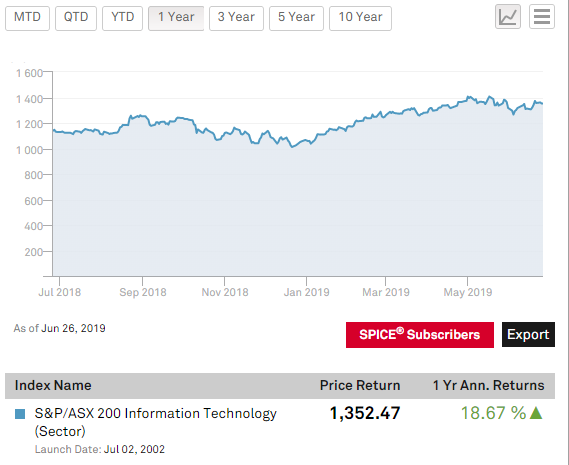 Let’s look at a few of Information Technology players listed on the ASX as follows:

Bravura Solutions Limited (ASX: BVS) is a provider of software and professional services for private wealth, insurance, pension, life insurance and superannuation industries. The company, which was founded in 2004, operates across ANZ, United Kingdom, Asia, Europe and Africa.

On 27 June 2019, Bravura Solutions announced that it has improved the offer to acquire GBST Holdings Limited (ASX: GBT) at $3 per share. According to the release, Bravura confirmed with the Board of GBST Holdings that BVS is ready to revise the non-binding indicative proposal to acquire GSBT Holdings through completion of the satisfactory process and exclusivity deed (process deed) (updated proposal). Also, BVS asserted that in the absence of a superior offer, it would not improve the offer, which is now $3 per share.

It was reported that the process deed includes exclusive access to the due diligence, and an intention from GBST to recommend the indicative proposal to its shareholders. Further, Bravura Solutions intends to work with GBST Holdings to get the support of a limited number of GBST’s substantial shareholders.

As per the release, Bravura undertook sufficient work to assess the potential acquisition of GBST, which included preliminary due diligence, analysis on publicly available information, management presentation and CFO session. Further, this analysis entailed FY20 budget, an indication of upcoming initiatives, ongoing capital expenditure and R&D commitments until FY22. 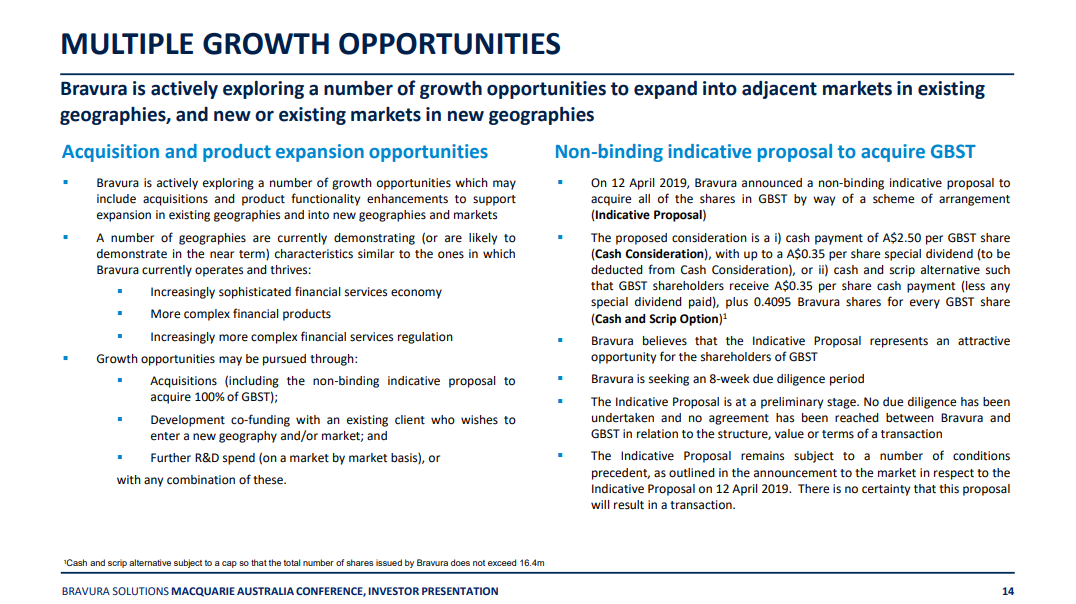 Reportedly, the company expects to complete the confirmatory due diligence and negotiations regarding any scheme implementation deed in four weeks. Furthermore, Bravura raised equity to fund the transaction; hence, the implementation deed would not be subject to a funding condition.

Bravura Solutions asserted that the ongoing delay and uncertainty are concerning, and if the process deed is not executed before 4 pm on Friday 28 June 2019; the updated proposal to acquire GBST Holdings would be withdrawn.

Adslot Ltd (ASX: ADJ), a publicly traded company on the ASX, is a provider of trading technology and digital marketing services. It serves leading brands, agencies and publishers, globally.

On 27 June 2019, Adslot Ltd gave an update related to progress in the US market, specifically regarding agency holding company discussions. As per the release, the company has confirmed that a trading agreement had been executed with the programmatic trading division of one of the six largest agency holding organisations in the United States. Furthermore, the agreement enables buyers from the programmatic trading division to use the Adslot platform and acquire media from the network of publishers by Adslot in the US market. Importantly, this agreement is the first one from one of the six largest media agency holding companies in the United States. Initial trades from this source are anticipated within the September 2019 quarter. 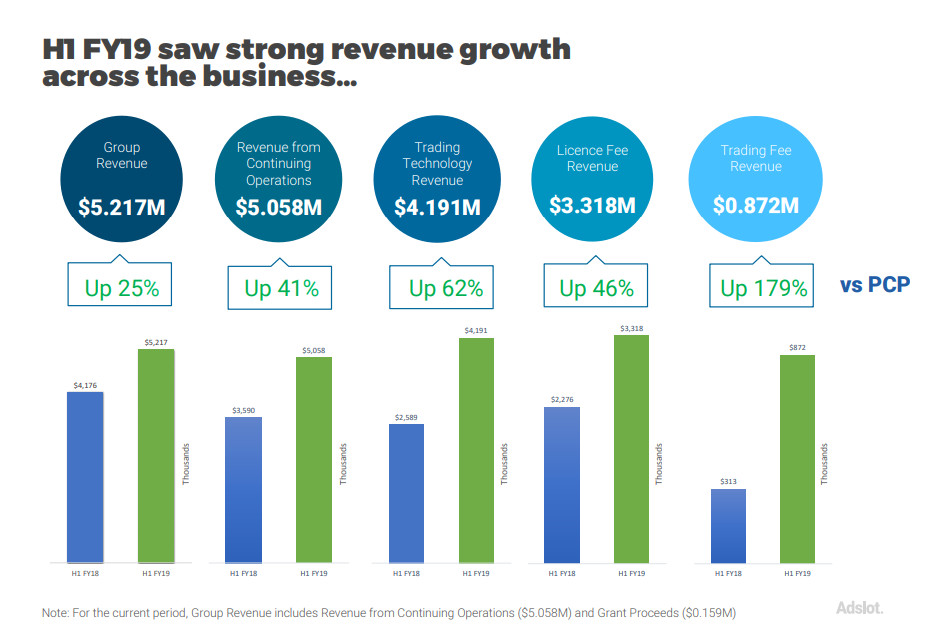 It was reported that the company also reached an agreement with two additional holding companies to enable initial trading – expecting that a Master Services Agreement (MSA) would be executed at a later date. In addition, initial trades with these two companies are expected in the September 2019 quarter. Reportedly, the discussions regarding MSAs with the remaining three large agency holdings are underway.

Reportedly, the institutional entitlement offer raised $6.7 million excluding the costs, with 112.7 million new fully paid ordinary shares to be issued to sophisticated and professional investors at an issue price of $0.06 per new share. Also, the new shares are expected to be issued on 8 July 2019, and trading is likely to commence on 9 July 2019. Importantly, this capital raising would fund the ongoing product development of AkidaTM, its production with Socionext and launch of AkidaTM Neuromorphic System-on-Chip.

As reported yesterday (on 26 June 2019), the retail entitlement offer would commence on 3 July 2019. Also, eligible shareholders holding BRN shares as on 28 June 2019 can apply for new shares. Also, the offer price remains unchanged from the institutional offer at A$0.06 per new share. A detailed booklet would be dispatched by the company on 3 July 2019.

On 27 June 2019, BrainChip Holdings also released a presentation to provide the details of the offer and its AkidaTM Neuromorphic System-on-Chip. Also, the presentation provided a market outlook for the deep learning chipsets. 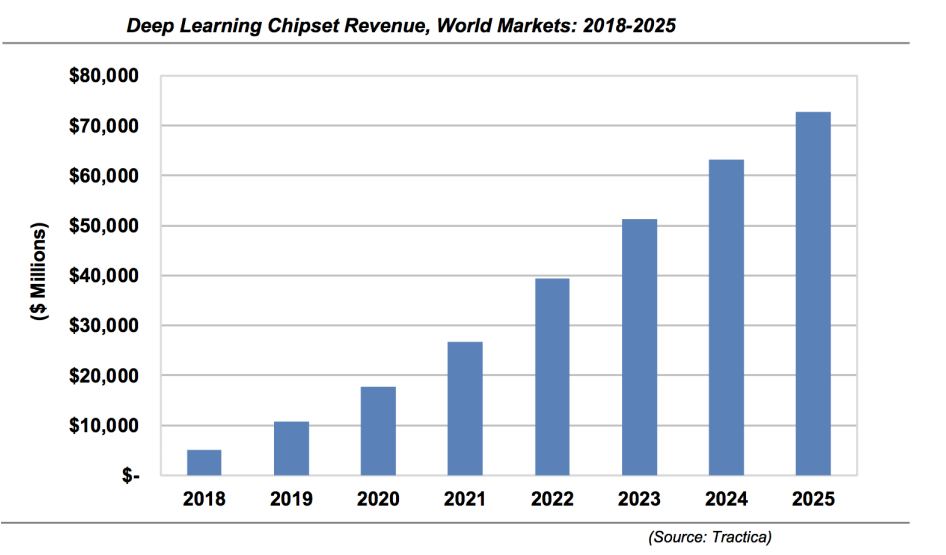