AI tech developer, BrainChip Holdings Limited (ASX: BRN) had requested to the securities in the trading halt on 25 June 2019 pending release of announcements on the proposed material contract and a proposed capital raising.

On 27 June 2019, the company notified the market about the conclusion of the institutional component of its one for four quicker non- renounceable entitlement offer of fully paid shares, as was declared to the market on 26 June 2019.

The company also released a presentation, dated 26 June 2019, containing information related to BRN’s activities, as mentioned in the summary below: 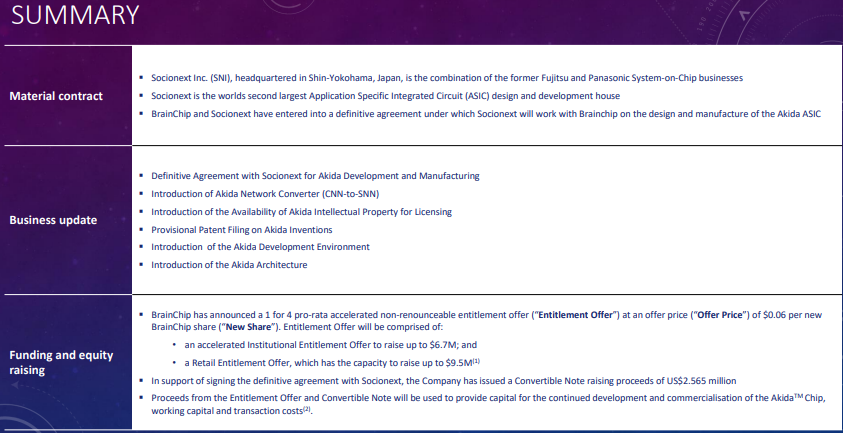 In a series of announcements released on 26 June 2019, BRN reported the inking of a definitive agreement with SNA (Socionext America Inc) related to the advancement and the manufacture of Akida Neuromorphic System-on-Chip (NSoC). Further, the company reported that a financing agreement was completed, and the launch of a new entitlement offer to raise further capital. 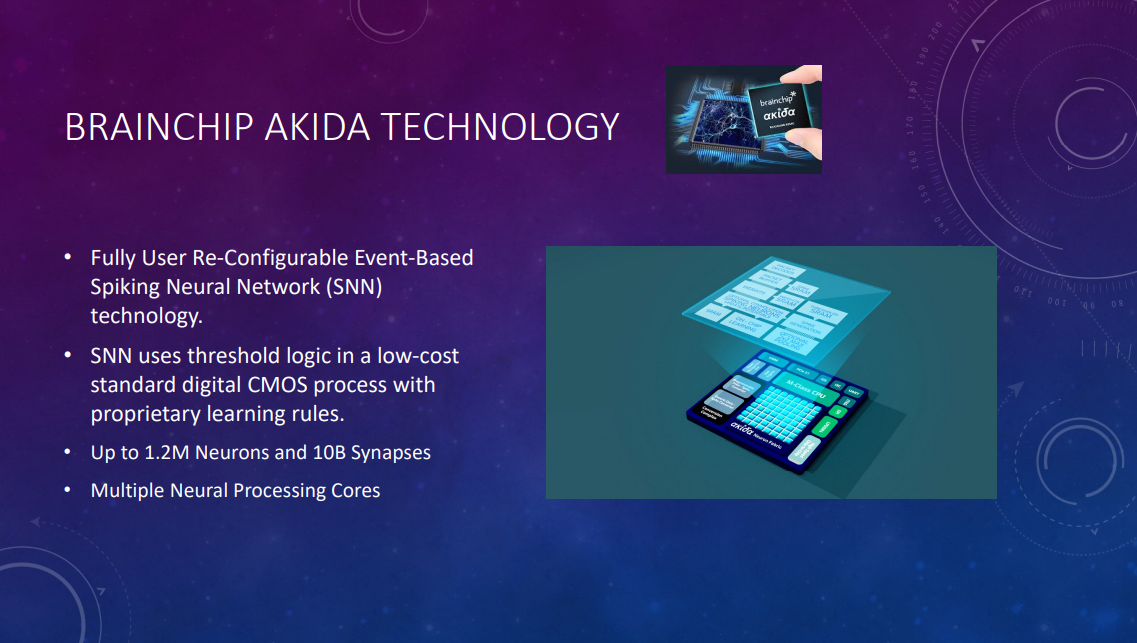 Akida Neuromorphic System-on-Chip (NSoC): According to the release, SNA is the American division of Socionext Inc. (SNI), headquartered in Shin-Yokohama, Japan, and SNI is the world’s second largest ASIC design and development house. Also, the collaboration streamlines SNA’s range of engineering disciplines and demonstrated experience in ASIC’s experience related to designing with AI engineering teams in Aliso Viejo, California region and Toulouse, France region of BRN.

Meanwhile, Socionext would provide a host of services and turn-key ASIC services to BrainChip, which includes intellectual property (IP) blocks for the external interfaces, IP verification, final logic design, place and route of the integrated circuit, but limited to the CPU Complex for internal control and data pre-processing, as well as managing wafer fabrication, assembly and test operations.

Capital Raising: BrainChip reported that a financing agreement was executed for US$2.565 million with CST Capital Pty Ltd as trustee of the CST Investments Fund (CST Capital); this funding would be utilised for the initial development of Akida device. In accordance with the agreement, US$2.565 million would be provided by CST capital in consideration of convertible notes, which were issued at upfront 10% interest payment as a discount on the face value of notes – US$2.85 million (face value). It was reported that the notes have a maturity period of one year and three to six months of extension period; the terms of the raise also include:

Entitlement Offer: BrainChip also announced an Accelerated Non-renounceable Entitlement Offering, which allows investors from New Zealand and Australia to subscribe for new shares in the same terms as institutional investors. As per the release, the entitlement offer is not underwritten and provides 1:4 accelerated non-renounceable entitlement offer of New Shares in the Company to eligible shareholders at $0.06 per new share. Also, the offers price depicts a discount of ~36% to the last closing price and 22% to the 15- day VWAP before the announcement of the Entitlement Offer. Also, the offer includes of the following:

On 26 June 2019, Dreamscape Networks Limited (ASX: DN8) provided a trading update for the second half of the financial year 2019 (2HFY19). Previously, the company had reported about the prolonged strong trading conditions in 2HFY19; subsequently, the company also announced FY19 guidance based on the account for 31 March 2019.

It was reported that the trading conditions remain vibrant across South East Asia (underlying business), which was consequential to the best monthly results in April & May. So, the Board intended to update the full year guidance as the bookings are on track with internal budgets, and trading is in the month of June.

Dreamscape Networks believes that the Non-IFRS measure provides an understanding of the business, and these measures should not be substituted for IFRS measures. It was reported that total bookings for the underlying Crazy Domains business and Vodien business have continued to perform strongly in 2HFY19 to 31 May 2019. Also, 9% growth in underlying and 20% increase in Vodien was witnessed against the comparative period in 2HFY18.

On 26 June 2019, ARG Group Limited (ASX: ARQ) announced that it is amid the transformation from Melbourne IT, and the company is in the twelfth month out of eighteen months of the transformation process. It aims to consolidate ten existing brands into two brands; Arq Group – premium digital brand service mid-market and above and Netregistry – an online solution for the small business market. 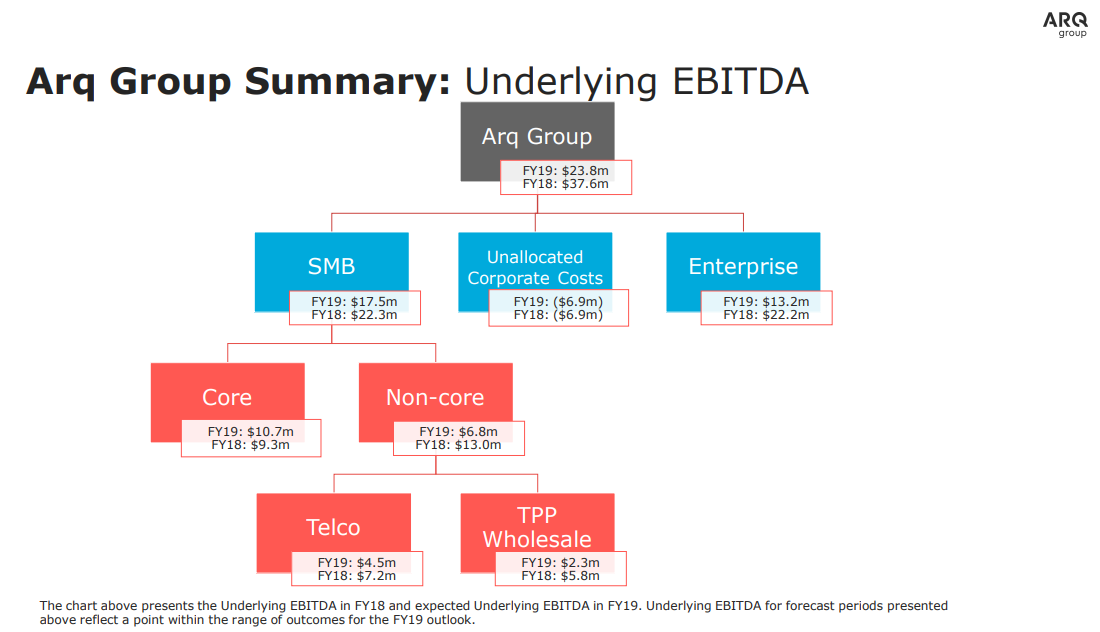 Full Year Outlook: On the outlook update front, the company mentioned that it has previously, adopted a new degree of financial disclosure, and split the P&L in two as “Core Operations” & “Non-core Operations”. It was reported that the company intended to help the investors understand the contribution of the core operations. ARG Group had forecasted that underlying EBITDA in between $22.0m to $25.5 million for FY19.

Core Operations: It was reported that ARQ Group is now expecting the underlying EBITDA to be between $15.5 million and $18.5 million in FY19. Under the core operations, the SMB division observed consistent growth in new solutions revenue and cost benefits from productivity initiatives; hence, the group has forecasted underlying EBITDA in the range of $9.7 million to $10.7 million in FY19.

Due to execution problems in Melbourne and delays in turning on revenue from new contracts, the company is expecting underlying EBITDA in the range of $12 million to $14.5 million from the Enterprise division, which has subdued from the first half. ARQ Group believes that this is a temporary challenge, and the company’s recovery plan is underway, which has depicted signs of improvement.

As per the release, the growth in the Enterprise in H2 FY19 is forecasted be at least 45% more than the H2 FY18. Also, the cost reduction initiatives are expected to deliver savings of $4.1 million in 2019, along with yearly savings of $7.8 million.

Debt and Dividend: Despite the net leverage ratio is outside the desired range, the company continue to operate within its covenants, as reported. According to the release, the group would refrain from declaring an interim dividend on the back of lower than expected earnings in H1 FY19. Importantly, the group would reassess the full-year dividend in December 2019, and the dividend would be distributed consistently with the dividend policy of returning between 55% to 75% of full-year underlying NPAT to shareholders.

Conclusion: ARQ group believes the organisational changes would underpin the future growth, while the recovery is underway, and improvements had been visible in Melbourne. Further, the group expects the pending revenue from the delayed contracts to be realised in Q3, and the group is expecting a stronger H2 FY19 performance.