Raiz Invest Limited (ASX: RZI) is a pioneering mobile led financial services company in Australia. Backed by a micro-investment platform available via the Raiz app or its website, Raiz provides its customers an opportunity to systematically invest on a regular basis either in small or large amounts, in or outside superannuation.

Raiz was awarded the ‘Investment Platform Innovator of the year’ in 2019 at the FinTech Business Awards; this award came on back of the company winning the 2018 ‘Australian FinTech Award’ for FinTech Innovation in Wealth Management (Robo-Advice).

Besides, the multi award winning Raiz app has received over 670k signups since the launch in 2016.

On 29th May 2019, the company announced that it has entered into a joint venture with Jewel Digital Ventures Sdn Bhd (Jewel), which is a wholly owned subsidiary of PNB Equity Resource Corporation Sdn Bhd (PERC). The signing of JV marks a major milestone for the company in its journey towards expansion into Southeast Asia.

With 13.8 million accounts, PNB is one of the largest asset management firms in Malaysia with an AUM of ~A$104 billion. Jewel is PNB’s investment vehicle set up to lead its digital business, with an objective to unlock digital value propositions for current and future customers of PNB.

The JV is structured with 70% of the stake with Raiz Invest, and the remaining 30% is held by Jewel. Raiz is supporting the JV by providing the technology whilst Jewel has agreed to offer the required capital after all the conditions are being met, which includes granting of a Malaysian licence.

Commenting on the Joint Venture, the chairman of the company, Tony Fay stated that the JV would help the company expand its reach into Southeast Asia. He also stated that by teaming up with a trustworthy group such as PNB, Raiz is paving its groundwork for a sustainable growth, in one of the world’s fastest growing markets. He also highlighted that there is an underlying demand for fintech services and products in Southeast Asia.

With the Joint Venture in its bag, the company is now looking to issue a formal request to the regulator for acquiring the license. The management is envisaging the platform to go live by the end of CY19 or early next year. Raiz holds permission for a licence to allot mutual funds in Indonesia.

On 29th April 2019, the company announced its March 2019 quarterly updates, highlighting the operational and financial performance.

On the operational activities front, the company witnessed the active customers during the period growing by 6.5% to 186,884, primarily aided by the increase in marketing spend and improved market conditions. Funds under management (FUM) for Raiz Invest Super improved by 33% to $37.8 million. The company also received 18.1% of funds inflow, taking FUM to $300.3 million. 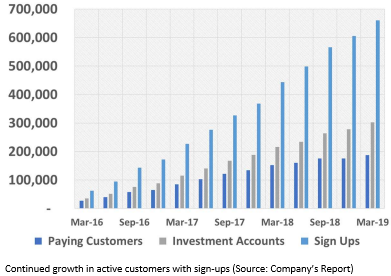 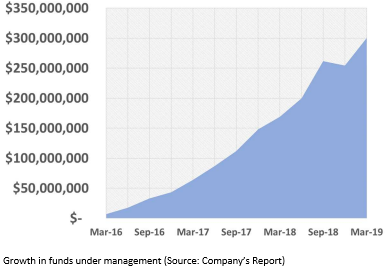 The company launched operations in Indonesia with over 22,000 customers already signed up to test the beta version of the app.

On 6th May 2019, the company announced its monthly FUM and active customers update.