QMS Media Limited (ASX: QMS) is from the telecommunication services sector and is the fastest growing media company in Australia and New Zealand.

On 23 May 2019, the company released its Annual General Meeting Presentation. The chairman, Wayne Stevenson QMS in the AGM highlighted the change in the company’s financial year-end from 30 June to 31 December for streamlining the reporting periods across all QMS entities as well as to align with industry standards. As an outcome, the financial year which concluded, was covered in the yearly report, and discussed in the presentation relates to the six months ranging between 1 July 2018-31 December 2018.

He further added that the company is positioned uniquely in the fast-evolving market. It focuses on developing as well as managing a portfolio in Australia and New Zealand, which drives the financial and operational performance of the company. The company has made a significant investment on proprietary data and analytics and will continue to further invest in it as it provides the company with a unique platform of dynamic audience insights in order to drive underlying performance.

There is a unique growth opportunity for the company with the expansion of QMS Sport. The strategic investment made by the company in future sport revenue streams will not only strengthen its sports technology capabilities but also strengthen its position in the highly fragmented international sports media market. Mr Wayne Stevenson also stated that the company is well placed to deliver strong growth and strong returns to its shareholders. The company applies best in class technology and innovation across the global sports media landscape by its fundamental strategic pillars of quality and audience engagement.

Simultaneously, as the company is growing and investing its QMS Sport business internationally, it also remains focused on meeting its financial targets as well as delivering sustainable growth in shareholder value.

In New Zealand, the company announced the strategic merger of its out-of-home and production businesses with MediaWorks for creating the largest multi-media group in New Zealand. In the Merged businesses, the company will have 40% of the shareholding. This merged business will be the first in the market, which will have the combined power of out-of-home, radio, TV and digital. However, the proposed merger depends on various terms and condition, such as financing and approval from New Zealand’s Overseas Investment Office.

The three distinct business segment QMS Australia, QMS New Zealand and QMS Sports of the company distinguishes it from the rest of the industry. Each of the division has a strong value proposition, growth profile as well as scalability. Thus, the group could realize true value for shareholders. 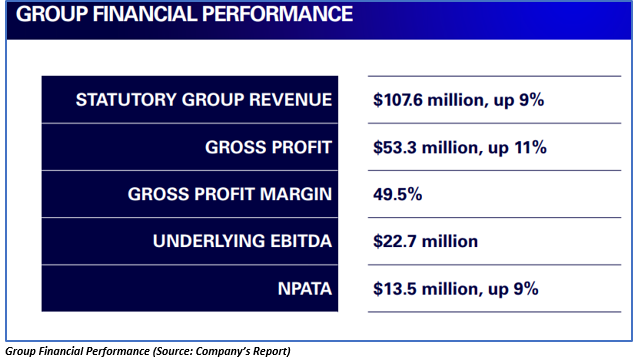 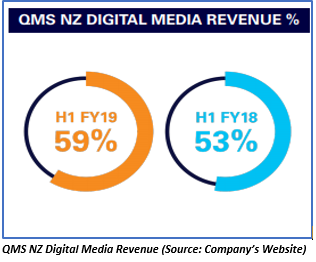 QMS sport generated a revenue of $13.1 million and a negative Underlying EBITDA of $0.3 million.

The stock of the company last traded at a price of A$0.730. QMS holds a market capitalization of A$238.45m and approximately. 326.65m outstanding shares.