Pushpay Holdings Limited (ASX: PPH) is a provider of donor management services, which includes donor tools, finance tools, etc. It was officially listed on ASX in October 2016. On 27th May 2019, the company, by release, updated the investors about being named as PwC NZ Hi-Tech Company of the Year 2019 on 24th May 2019 at NZ Hi-Tech Awards. PPH has received this recognition for the second consecutive time. The company’s combination of mission and metrics have been appreciated by the judges. Approximately 1,100 people attended the award ceremony, which was conducted to commemorate the successes of New Zealand Hi-Tech companies throughout 13 categories. The previous awardees of PwC NZ Hi-Tech Company of the Year include Datacom, Fisher & Paykel Healthcare and Xero.

Turning to the company’s 2019 Annual Report released on 13th May 2019. The company reported strong revenue growth, following its track record of delivering on guidance. The total revenue demonstrated a rise of US$28.2 million from US$70.2 million in FY18 to US$98.4 million in FY19, representing an increase of 40%. The robust set of results was achieved on the back of growing team capabilities, expertise and responsible investment into product design and development and targeted implementation of strategy. 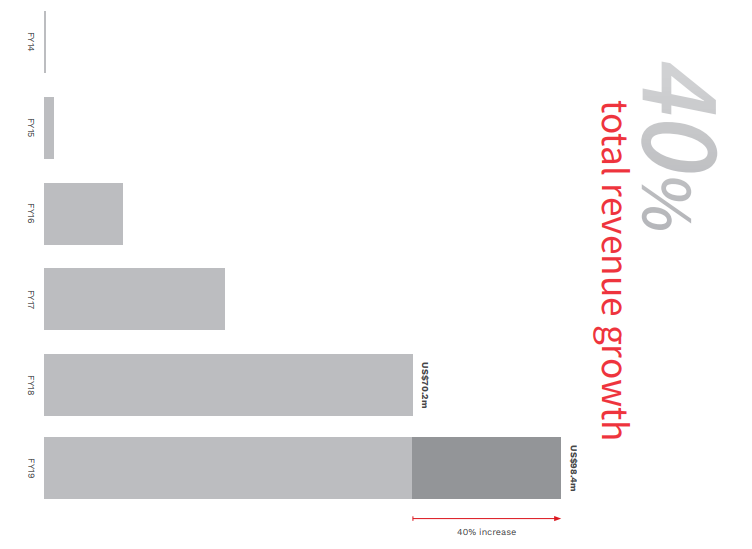 As per the annual report, gross margin for FY19 stood at 60%, showing a robust growth of 500 bps on Y-o-Y basis. It was mainly driven by its diligent approach towards optimization. Additionally, the company provided gross margin projection for the year ended 31st March 2020 of more than 63%. The total operating leverage for the company remained stable. The total operating expense witnessed an improvement of 28 percentage points from 93% in FY18 to 65% in FY19. The company’s NPAT for FY19 have improved by 181% to a net profit of US$18.8 million. The company’s EBITDAF went up 108% to the gain of US$1.6 million in FY19 from a loss of US$18.6Mn.

The average revenue per customer (ARPC) stood at US$1,315 per month from US$989 per month, increased by US$326 per month over the year to 31st March 2019, which also represents a 33% increase. The increased ARPC numbers were mainly driven by increased subscription fees from a new and existing customer and a larger proportion of medium and large new customers, among others. 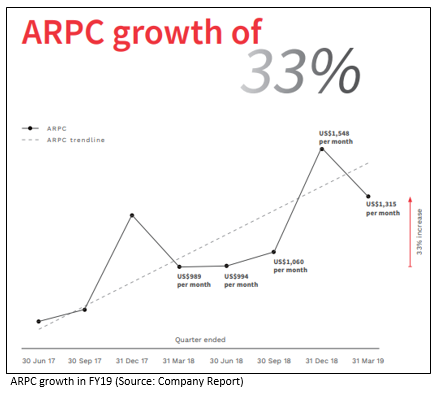