Karinga Lakes Potash Project (KLPP)- CPC has acquired 15% interest in the joint venture and also executed a technology licensing agreement, with an option to acquire up to 40% interest in the KLPP by investing up to $3 million. The KLPP consists of a chain of salt lakes representing part of the Central Australian groundwater discharge zone in the Northern Territory, Australia.

Parkwayâs Managing Director, Mr. Patrick McManus, stated âBy earning a 15% interest in the Karinga Lakes Potash Project (KLPP), CPC has demonstrated the value of CPCâs technology and capability in relation to potash and other brine projects.â

New Mexico Lithium Project (NMLP)- CPC has acquired an initial 50% interest in the NMLP by entering into a Joint Project Appraisal and Development Agreement (JPADA) with an unrelated US-based vendor. The NMLP covers the central zone (501 BLM - Bureau of Land Management claims, ~40km2) of a large playa lake system, the Lordsburg Playa, in the Animas Valley in the southwest corner of the state of New Mexico, US.

Activated Water Technologies (AWT)- Activated Water Technologies is a wholly-owned subsidiary of CPC that operates as a technology division of CPC. It is focused on the development and commercialisation of the brine processing technology-aMESâ ¢-by performing cutting-edge R&D, collaborating with strategic partners as well as performing a range of pre-commercial investigations, including process piloting studies to demonstrate the potential of the technology.

Mr. Patrick McManus said: âParkway has followed the progress of CPC over the last 2 years with interest and in particular have been most impressed with the successful aMESâ ¢ test-work performed by CPCâs AWT subsidiary.â 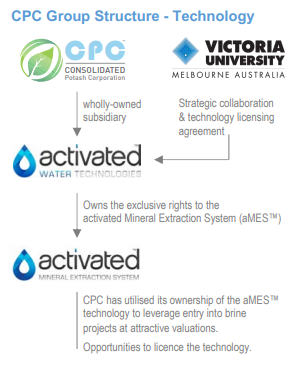 AWT and Victoria University are strategic partners and have been awarded several grants by the Australian Research Council (ARC). They are members of the prestigious ARC Energy Efficient Separation Hub.

Consideration for the acquisition of CPC includes:

ASX-listed Fertiliser Feedstock Explorer, Parkway has agreed to acquire 97.79% of CPC by issuing the acquisition consideration as follows:

In addition, Parkway will issue to Victoria University, with whom CPC wholly owned subsidiary AWT is party to a strategic collaboration and technology licence agreement, 6 million PWN shares in lieu of Victoria University exercising rights to acquire a minority interest in AWT.

Post-completion of the acquisition transaction, Parkway will reportedly move to compulsorily acquire the remaining 2.21% of CPC. In order to support the acquisition, Parkway intends to complete a capital raising of $450,000 via a placement of 90,000,000 shares in Parkway at a minimum placement price of $0.005.

Parkwayâs strategic acquisition of Consolidated Potash Corporation provides it with an expanded platform of attractive growth opportunities, most immediately through the Karinga Lakes Potash Project (KLPP) as well as an exciting lithium potash project in New Mexico. In addition to these two brine projects, the acquisition of CPC also provides Parkway with direct ownership of the aMESâ ¢ technology, suitable for brine processing and the production of potash and lithium, complementary to Parkwayâs existing K-MaxÂ® technology. 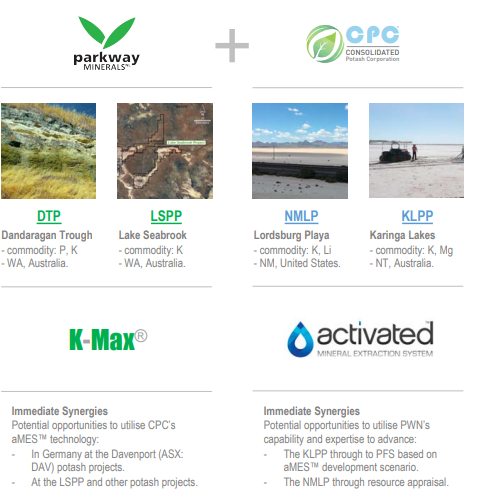 This represents a strong strategic fit with Parkwayâs portfolio providing immediate synergies and growth opportunities, including:

In a nutshell, the acquisition of these complementary projects and technology portfolio is projected to be value-accretive that has the potential to provide logical & immediate path to the market, positioning Parkway strongly for near-term growth.

Further, as a part of Parkwayâs acquisition of CPC, the Parkway board is expected to be strengthened through the appointment of Mr. Bahay Ozcakmak, the managing director of CPC, and Mr. Patrick Power, the founder of Western Potash (TSX-V: WRX).

Parkway anticipates the key milestones relating to the completion of the transaction as follows: