The production of the quarter was influenced by one of the six Albion reactors (tanks) at its Las Lagunas gold/silver project in the Dominican Republic being ruptured (as announced on 8 January 2019). It was followed by the closing of the plant for a month, the remainder of the tanks were structurally reinforced, and a ramp-up in throughput was followed. 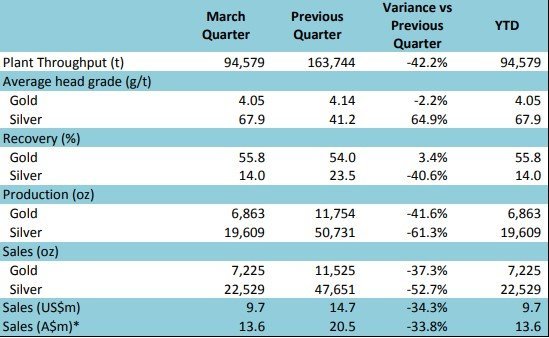 The gold production was 41.6% lesser than the previous quarter, and doré sales declined by 34.3% to USD9.7 million. Also, the sales revenue fell by 34.3 percent as compared to the prior quarter. 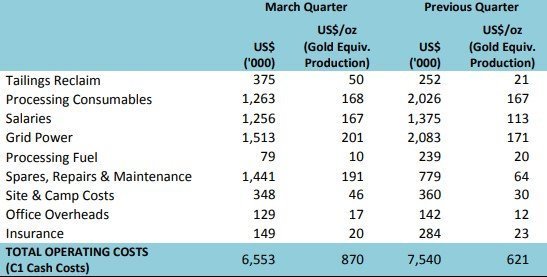 On the financial front, BanReservas (owned by Dominican Government) offered USD7.5 million of unsecured grants to the Las Lagunas gold/silver project. The remaining loan balance as on 31 March 2019 would be repaid in line, with the scheduled 15 July 2019 for USD2,000,000. Certain Shareholders have granted loans for the entire amount of A$3.2 million to PGI.

On the cash position front, the Group’s funds on 31 March 2019 stood at USD7.1 million. An extra USD1.0 million is on deposit, with the project’s power supplier as a performance bond and would be given back to PGI on the conclusion of the Las Lagunas gold/silver project during the period of December this year.

Besides, the company is planning to go ahead with the dismantling the plant by January 2020, with significant saleable items to be stored in a warehouse adjacent to Rio Haina Port (Dominican Republic).

The Company has submitted a formal claim to the Dominican Government for costs relating to its failure at the commencement of the project, to provide a suitable site for constructing a dam for the storage of tailings from the Las Lagunas Albion/CIL plant after processing.

On the business development front, PanTerra Gold Technologies Pty Ltd has submitted a revised proposal, whereby it will seek to register a wholly foreign-owned subsidiary in China to construct and operate a 50,000tpa Albion/CIL plant, with the mining company supplying 50% of the refractory concentrate at a grade between 35g/t Au and 40g/t Au, for a minimum period of 15 years at an agreed price based on a percentage of the value of gold contained in the arsenopyrite concentrate.

In October last year, Cuba based GeoMinera S.A chose PGI, as its proposed JV partner for the advancement of its gold deposit on the Isle of Youth in Southwestern part of the Cuban region.

Regardless of the unsatisfactory March quarter financial performance of the Las Lagunas project, PGI is assured that a clean concentrate from mined sulphide ore will normally have a gold grade in excess of 40g/t with +90% recovery.