Australia is well-known as one of the world's leading suppliers of gold, iron ore, coal, bauxite, copper, zinc, lead, manganese, and a number of other commodities.

The country has a prosperous resource sector that has long been a primary industry and major contributor to the Australian economy while being very welcoming of new entrants engaged in active exploration of their assets and aspiring to be developers. Moreover, according to the Department of Industry, Innovation and Science (DIIS), Australia’s resource and energy export earnings are all set to continue breaking fresh records in the upcoming year. The sector is also one of the strongest economic performers on the back of high-quality reserves of several mineral and energy commodities as well as best practice regulations and operations that bolster business and encourage investment.

Recently, the Australian government announced to have introduced new financing measures for its rare earths and critical minerals sector (Rare-earth elements, gallium, indium, tungsten, platinum-group elements (PGE), cobalt, magnesium, molybdenum, lithium, vanadium and others). These strategically important mineral projects would now be eligible to secure financial aid from Export Finance Australia (EFA), access to dual funding from EFA and the Northern Australia Infrastructure Facility (NAIF). Further, projects with defence end-use applications can also apply for a third source of funding through the Defence Export Facility. For additional support, Donald Trump, the US President, and Scott Morrison, Australian Prime Minister, got into an agreement in September 2019 to build on a US- Australia Action plan for Critical Minerals Cooperation. This plan is to boost research and development, diversity, and investment in critical minerals supply chains.

Australia also holds record for the world’s largest gold nugget weighing 72 kg found in 1869, Victoria. It ranks 2 on the world map in terms of gold production with 321 tonnes produced during 2018-19. The DIIS also forecast that gold prices in Australia are estimated to touch a record annual average high of AUD 2,042 an ounce in 2020, as the trade tensions and geopolitical risks push up the US dollar gold prices while weakening the Australian dollar.

What’s more? The global economy is currently facing recessionary risk and a correction in global equity markets is causing flow of funds into gold. Besides, Central banks’ are hoarding on gold which is further supporting the commodity’s prices while purchases are expected to stay above 700 tonnes in 2020.

Overall, there is a very strong economic case for gold companies at the backdrop of a brilliant mining jurisdiction Australia and positive global outlook. World gold consumption increased strongly in the first half of 2019 and forecast to grow by 3.7% in 2020 and 1.2% in 2021, reports DIIS.

One such company is Ora Banda Limited (ASX: OBM), a gold exploration and development company, with an expansive land tenure in the highly bountiful Eastern Goldfields of Western Australia. 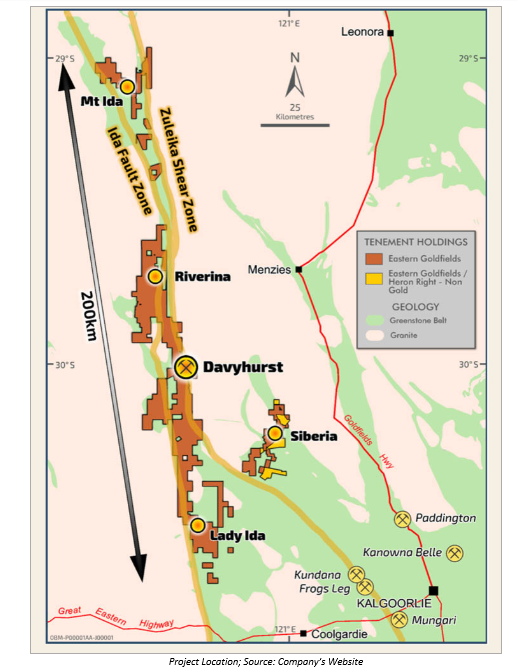 Ora Banda had a new dawn with its securities relisted on the Australia Securities Exchange on 28 June 2019, following which it has been on a transformative journey to strengthen its finances, and ramping up resource drilling and exploration activities to shortly move into production.

On an encouraging note, GR Engineering Services Ltd has estimated that the remedial work and recommissioning capital cost for the processing plant is AUD 8.52 million (EPCM basis), 43% lower than Ora Banda’s previous estimate.

Since the last few months, Ora Banda’s key focus has been the five priority targets - Riverina, Waihi, Callion, Siberia and Golden Eagle located within different project areas, where the company has been advancing-

Major headways have been achieved with regards to these drilling programs and high-grade encouraging results are being announced simultaneously. Ora Banda’s has a large untapped gold deposits within its ground package and the company is looking forward to a momentous period forward.

The last one year saw great progress in a short span of time for a few other resources company as well, such as Arafura Resources Limited (ASX: ARU). ARU continued to move closer to the goal of commercialising the massive resource of neodymium and praseodymium at the Nolans Project with the long-awaited Definitive Feasibility Study (DFS) delivered and completion of a rigorous and highly technical Pilot Program to help ensure a smooth production ramp-up at the site.

Another Gold company, Spectrum Metals Limited (ASX: SPX) discovered its new exciting high-grade gold system, the Penny West Gold Project in the last one year with drilling commenced by mid-February 2019. In less than five months, from drilling to the end of FY19, the company had completed 12,676m of RC drilling and expanded the initial discovery from one hole to a system that currently continues through 900m of strike through the Penny West/North project area.