Australian exploration company Musgrave Minerals Ltd (ASX: MGV) has been focused on accelerating the exploration at its advanced gold and copper project- the Cue Project in Western Australia’s Murchison district. Musgrave’s objective is to significantly increase the gold and other base metal resources at the project via exploration.

In order to fast track the exploration at the project, Musgrave entered into an Earn-in and Exploration Joint Venture Agreement with Evolution Mining Ltd (ASX: EVN) in September 2019 for exploration centered on the Lake Austin Area of the Cue project.

Musgrave’s in-house expertise, coupled with the extensive technical knowledge and financial resources of Evolution Mining - a highly regarded explorer and a leading gold producer, is expected to greatly benefit Musgrave in the exploration at Cue.

In an announcement made on 18 November 2019, Musgrave confirmed the ongoing diamond drilling at the Cue Project, focused on testing four high-priority gold targets at the Lake Austin North prospect.

This initial program will consist of ~ 4 drill holes and will take ~ 4-5 weeks to complete, with the first assays expected in early February next year.

The recently commenced drilling program will consist of a minimum of 1,200m of diamond drilling to test four targets for high-grade basement gold mineralisation below transported cover at Lake Austin North.

As per the terms of the agreement, the drilling program will be funded by Evolution and will be managed by Musgrave.

The drilling will focus on identifying the basement gold source of large geochemical halos defined by aircore drill results that include: 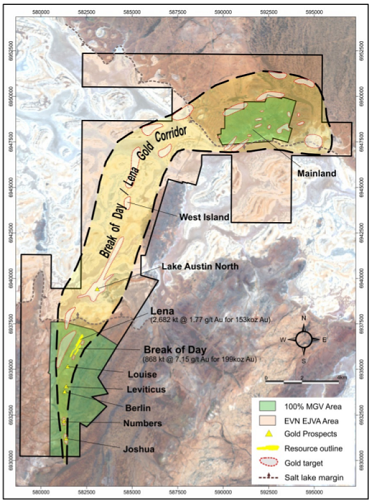