It continues to be a very busy time for Australian gold and base metal explorer, Musgrave Minerals Limited (ASX: MGV), as it builds on the success of its 2019 exploration programs into 2020 as well. The company is strongly progressing towards its objective of increasing the copper and gold resources at its Cue Project, located in the Murchison Province of Western Australia.

At its Cue Gold Project, Musgrave has reported high-grade gold results from Reverse Circulation (RC) drilling at the Consols Prospect at Mainland, supporting the company’s view that there are significant gold discoveries still to be made in the Murchison.

In the month of March 2019, Musgrave executed an Option Agreement to obtain the Mainland tenements. Subsequently, the company completed an initial RC drilling program and encountered mineralisation: 3m @ 5.4g/t Au from 74m down hole (19MORC008) at the Consols target.

Follow-up RC drilling consisted of 12 holes for 1,006m across three targets and has extended the Consols gold mineralisation along strike and down dip where it remains open and untested. Drill sampling involves a combination of six metre composite and one metre individual samples.

To be noted that the Mainland area is not a part of the Evolution Mining Ltd (ASX:EVN) Earn-in and Exploration JV at the Lake Austin North.

The assay results returned high-grade gold intersections in adjacent holes at the Consols Prospect where the mineralisation remains open at depth and along strike to the west, as summarized below:

The company is planning an additional follow-up drilling which will be scheduled for Q1 2020. 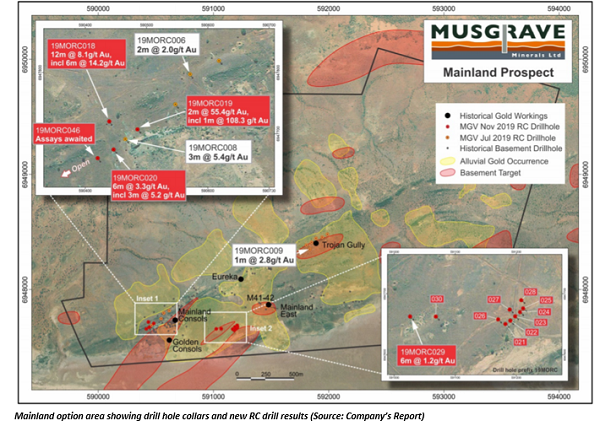 Importantly, the holes drilled by the company are demonstrating good continuity of mineralisation with variable high grades consistent with the historical underground production records. The results are not so different from the early results at Break of Day with the gold mineralisation remaining open to the west and down dip.

At Cue Copper Project, Musgrave along with its Joint venture partner Cyprium Metals Limited (CYM) is busy accelerating the exploration and expansion of copper resource base, with the Eelya South prospect being located only 5 km to the south of the Hollandaire copper mineralisation.

As announced on 26 November 2019, after getting the approval from the WA Department of Mines, Industry Regulation and Safety, CYM has commenced a regional RC drilling program at the Eelya South prospect. The program will include 2,430 metres drilling in three phases; and each phase will be dependent on the mineralization results of the previous phase.

This RC drilling program follows the completion of surface sampling program where the company had observed high-grade copper samples from a shear occurring at surface for more than 500m length, as summarized below:

On 27 November 2019, Cyprium Metals announced that it has begun the metallurgical column test-work on the massive sulphide mineralisation from the DD (Diamond drilling) program that focused on the Hollandaire Prospect’s existing copper mineralisation. This test-work aims to determine the optimal copper extraction method.

The company was very confident to see the leaching of copper into solution at room temperature conditions within one hour from the initiation of the test-work.

The results from the metallurgical diamond drill holes included: