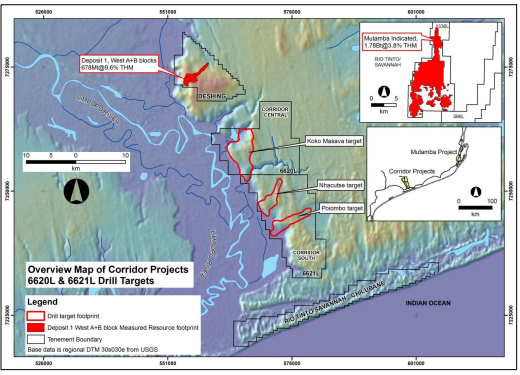 In the market update on ASX, MRQ reported to have identified 11 high quality targets for drill testing, based on a comprehensive exploration data review.

1.Historic aircore drilling: The company identified impressive high THM (Total Heavy Mineral) grades from surface to depths up to 90 metres from reconnaissance aircore drilling undertaken by Southern Mining Corporation and Western Mining Corporation during 1999-2000. A total of 35 holes were drilled at the Corridor projects, with the holes defining zones (high grade) of more than 5 per cent THM with surface footprints up to 5.5 km x 1.5 km.

4.Preliminary Mineralogical Study: Results from a preliminary mineralogical study unveiled a robust and high quality, ilmenite-rich valuable heavy mineral assemblage. The palaeogeographic coastal features known to host high-grade strandline style HMS mineralisation were identified to be as good as, or better than for the nearby Corridor Deposit 1, which is being mined by Deshing Minerals.

The evaluation of all the above five data points enabled the company to identify the 11 discrete, high quality targets for drill testing. Of these 11 targets, the company defined three targets with higher priority for immediate aircore (AC) drill testing. The drilling program, with an initial depth of 5,000 metres and planned to be carried out under a phased approach, is focused towards establishing a quality JORC-compliant mineral resource estimate to be used for starting a Scoping Study. 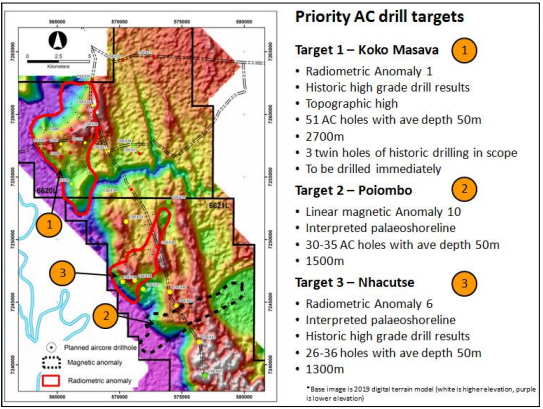 Koko Masava Prospect – The First Target under the Drilling Program

The first target, namely the Koko Masava prospect, is drill ready.According to high intensity radiometric anomalism and high total heavy mineral (THM) grades defined in the Koko Masava prospect, the higher priority radiometric Anomaly 1 holds the highest potential of delivering on the strategy of MRQ to focus on the zones with high THM grade and high value mineral assemblage.

As part of the drilling program at the Koko Masava prospect, the company would drill a maximum of 51 planned drill hole locations to an average depth of 50 metres. Additionally, the program would cover selected deeper ‘stratigraphic’ holes to further understand the depth potential for mineralisation. 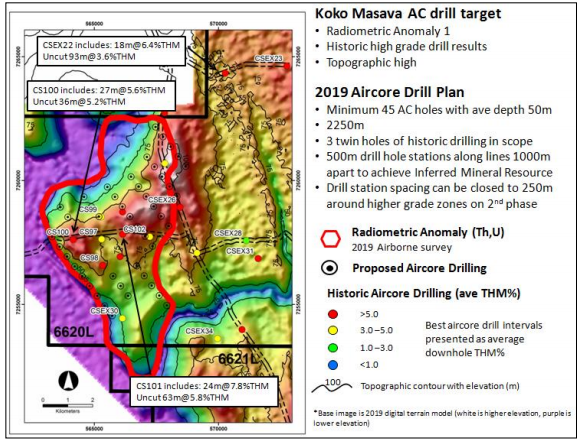 Furthermore, the company would include at least 3 twin holes of previous historic drill holes under the current AC drill plan. Additionally, community engagement, drilling permits and environmental approvals are underway.

Via several tender proposals, the company has shortlisted a suitably qualified drill contractor, with preparations related to the mobilisation progressing well. MRG Metals Limited plans to start mobilisation during the mid of August 2019.

MRG Metals Limited intends to continue regional auger drilling on the Corridor tenements, aimed towards generating, testing and prioritising further targets for AC drilling. Moreover, the company plans to review drilling priorities, with the collection of any new data.

In its recently released cash flow statement for June quarter, the company reported AUD 243k operating cash outflow with cash and cash equivalents at AUD 405,000 at the end of June 2019. The company plans to undertake AUD 100k in exploration and evaluation activities next quarter.

The stock of MRG Metals Limited last traded on 2 August 2019 at a price of AUD 0.007. MRQ has a market cap of AUD 4.67 million and approximately 667.17 million outstanding shares. It has provided impressive YTD return of 75.00%. The company’s securities were placed in a trading halt on 5 August 2019, pending the release of a capital raising announcement.