With a rich history in Western Australia for the discovery of Red October Gold Deposit and Namibia where it discovered three kimberlites, base metals explorer Mount Burgess Mining NL (ASX: MTB) is currently focusing on developing the Kihabe and Nxuu Base Metals Project in Botswana.

With a maximum depth of 64 meters, the Nxuu Deposit is a shallow basin-shaped deposit. It has a low cost, low risk operation potential and apt for onsite metal/mineral recovery processes, which would catalyse achieving beneficiation within Botswana.

The Company renewed the Prospecting Licence PL 43/2016 (The Kihabe – Nxuu Project) in November 2018 (to 31 December 2020) and can further extend it to 31 December 2022. Minister Molale has allowed renewal over the whole 1,000 sq km of the original licence area, offering lucrative opportunity of further discoveries outside of the currently known mineralised domains.

Vanadium Pentoxide- A Significant Credit For The Project

To date, neither Vanadium Pentoxide (V205) nor Germanium have been included in resource estimates for either of the Nxuu or Kihabe Deposits. However, integral to the Nxuu Deposits’ total mineralised widths, significant intersections of vanadium mineralisation occurs outside of the known Lead and Zinc domains.

Below are the observations from the recently conducted test work: 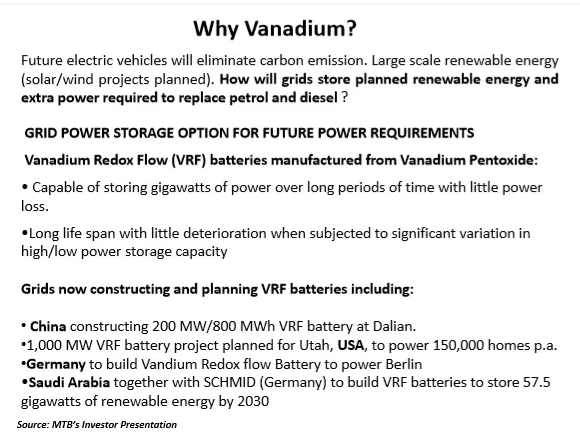 MTB’s Chairman and a major shareholder, Mr Nigel Forrester recently addressed Directors and shareholders of the Company and stated that MTB is initially concentrating on developing the Nxuu Deposit, which comprises of Zinc, Lead, Silver, Germanium and Vanadium.

In 2019, MTB focused on metallurgical test work on the Nxuu Deposit Vanadium samples conducted by ALS.

As per MTB, the Sensor Sorter process will result in a significant reduction in power requirements and power costs, also leading to a considerable reduction in capital and downstream treatment costs, water consumption and the Project’s environmental footprint.

STEINERT’s promising results with two test work regimes conducted on the +4mm size fraction of crushed quartz wacke, the host of mineralization depicted the below observations-

Acknowledging the fact that MTB will have to generate its own power for the Project, it is tapping the possible power requirements, and plans to conduct bulk test work through STEINERT’S Sensor Sorter process to verify the bench scale test work results.

Moreover, the test work on the Vertical milling process will be conducted, which requires merely 25 per cent of the power required for traditional ball milling. MTB believes this to have to the potential to result in considerable reduction in power needs.

MTB is in discussions with the Botswana Power Corporation to upgrade the grid power to Western Ngamiland and evaluate the commerciality of constructing a link line from Gumare to the Project. It is also reaching out to companies that provide solar hybrid power solutions.

Post verification of a power option and concluding ~2,500m of diamond core drilling, MTB will be able to progress with -

With advancement at Nxuu at a rapid pace, MTB is on a growth trajectory to be a world-class Vanadium developer as it takes care of the soaring Vanadium demand while supporting its shareholders interests.