McGrath Limited (ASX: MEA) is primarily engaged in the business of facilitating the sales of the real estate as well as property management services.

The company, today on 5th June 2019, announced that it has entered in an agreement for the acquisition of the business and assets, including a rent roll, of a business owned and operated by Richard Shalhoub, which currently operate as Sydney Sothebyâs International Realty - CBD and Pyrmont, a high performing sales agent prominent in Sydneyâs lucrative CBD and northern CBD harbourfront market.

The total consideration will be settled in cash, which is approximately worth $1.6 million. The tentative date of the completion of the agreement is early July 2019. All conditions for the agreement are expected to be satisfied by McGrath and Richard Shalhoub, as it is legally binding. The short-term earnings outlook for the company is not expected to materially alter post completion of the acquisition.

The CEO of the company, Mr Geoff Lucas said that as Richard returned to McGrath, this will be beneficial for both, and it is also in line with the overall strategy of the company to increase market share in the key markets with the recruitment of agents who possesses the desire to be part of a well-resourced and well-established brand.

Mr Shalhoub has established himself as one of the CBDâs leading agents over the past 15 years and has worked in McGrath for nine years previously from 2007 to 2016. Mr Shalhoub became the Principal of Sydney Sothebyâs International Realty - CBD and Pyrmont after leaving McGrath in August 2016. His contribution was significant to the company after he was appointed by Property NSW in 2014 as their exclusive selling agent for the Millers Point program and was very closely involved in the success of the State Government sell-off.

Mr Shalhoub is of the opinion that the management needs to be aligned with McGrathâs respected and dominant brand with strong referral networks to best represent its clients. The small agencies will have an increasing urge to consolidate to grow the market share by focusing on servicing their clients rather than the day-to-day running of a business.

In the recent past, McGrath Limited stated that consistent with the previously announced corporate strategy of the company to maintain its presence in the Lower North Shore of Sydney and expanding the rent roll assets organically and by acquisition, the company has made an agreement to acquire the business and assets, including rent roll, of a real estate business owned and managed by John McManus, who is a leading real estate agent prominent in Sydneyâs Lower North Shore market. The total consideration is expected to the amount of approximately $2 million and will be settled in cash.

In another announcement made in March 2019, MEA informed investors about stepping down of its CFO, Glynn Wright. 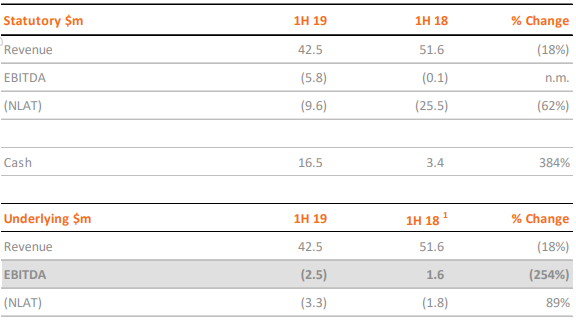 Turning to the financials, the revenues outperformed the market in new listing, but the challenging market conditions impacted the growth. The companyâs revenue decreased by 18.0% to $42.5 million in 1H19 as compared to $51.6 million in the prior corresponding period. The consolidated entity loss after providing for income tax for the half year ended 31 December 2018 amounted to ~$9.60 million as compared to a loss of ~$25.50 million in 2017. The underlying EBITDA remained consistent with the guidance for 1H19.

The cash, however, increased substantially to $16.5 million in H1 FY19 as compared to $3.4 million in H1 FY18. The operating cash flow includes tax refund of FY18 instalments ($1.3 million), the investing activities predominately related to the acquisition of two rent rolls ($0.9 million), and the financing cash flows (second tranche) of the Aqualand investment received in August ($4.9 million).

Going forward, the company expects the underlying EBITDA for the second half to be influenced by the difficult ongoing trading conditions, with issues such as the NSW and Federal elections further influencing the property market and McGrathâs performance.

In 2019, key priorities of the company will be to maintain a focus on attracting and developing the industryâs top sales agents, integrate new data-driven marketing and technology solutions for both customers and agents, partner with leading property data providers to generate market-leading insights, utilise latest technology combined with McGrathâs sales expertise to enhance customer service, continue to assess strategic acquisitions in key growth areas and focus on increased productivity, efficiency and cost reduction initiatives.