The following image gives an idea as to how the share price of IFL has trended in the span of past 3 months:

Recently, we have written some important information on Calima Energy Limited (ASX: CE1), and the readers can view the article by clicking here.

IOOF Holdings Limited (ASX: IFL) recently announced that it has reached an agreement for the class action which was commenced in April 2019 against it in the Supreme Court of New South Wales to be discontinued with no order as to costs. It needs to be noted that the settlement needs Court approval. During Q3 FY20, Funds under Management, Advice and Administration (FUMA) witnessed a growth of 34.2% to $195.6 billion. The acquisition of the P&I business has added $77.1 billion to FUMA. IFL added that the proprietary platforms witnessed net inflows amounting to $180 million, and in financial advice, the company experienced no significant outflows. IFL has total debt facilities of $675 million, out of which $355 million has been drawn as at 31 December 2019.

G.U.D. Holdings Limited (ASX: GUD) recently notified the market that Marathon Asset Management LLP has made a change to its substantial holdings in the company on 23rd June 2020 with the current voting power of 10.19% as compared to the previous voting power of 9.99%. The company has renewed its debt facilities in January 2020 involving $150 million for the next four years, a further $50 million for 8 years and $25 million of short-term facilities that are reviewed every January. Following the payment of its FY20 interim dividend, net debt to underlying EBITDA of the company stood at 1.8x. Considering the uncertainty regarding the potential demand impact for GUD products, the company has suspended its FY20 guidance. The anticipated demand impacts are likely to be more acute in New Zealand in the short term. 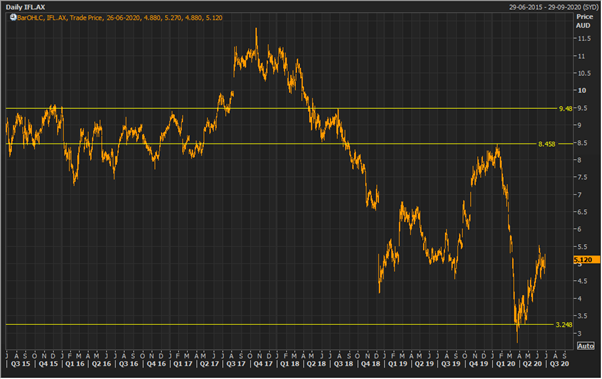