Recently, we have written an article on Saunders International Limited (ASX:SND), and the readers can read the same by clicking here.

Lynas Corporation Limited (ASX: LYC) has recently notified the market that it has been awarded a Phase I contract for a U.S. based Heavy Rare Earth separation facility by U.S. Department of Defense. The company added that the successful completion of Phase I milestones might lead to further contracts for commercial scale production and operation of a U.S. Heavy Rare Earth separation facility. For the quarter ended 31st March 2020, the company reported a rise in revenue and production despite subdued production levels in early January 2020. The total NdPr production for the period stood at 1,369 tonnes, reflecting a rise from 1,270 tonnes in the prior quarter. The company reported strong sales revenue of A$91.2 Mn even with a lower average selling price than the previous period. LYC is in a solid financial position with the closing cash balance of $124.6 million.

Perenti Global Limited Rose by 9.286% on the Australian Stock Exchange

Perenti Global Limited (ASX: PRN) recently announced that National Australia Bank Limited and its associated entities have ceased to become substantial holders in the company on 8th April 2020. In another update, the company announced that it has decided to defer its interim dividend payment of 3.5 cents per share until 20th October 2020 due to COVID-19 pandemic and subsequent global financial impact. PRN possesses a solid liquidity position comprising cash reserves of around $305 million and undrawn revolving credit facilities of $100 million at the end of March 2020 and is focusing on capital and liquidity management. Considering the uncertainty from COVID-19, the company has suspended its underlying NPAT guidance range of $115 million -$120 million. 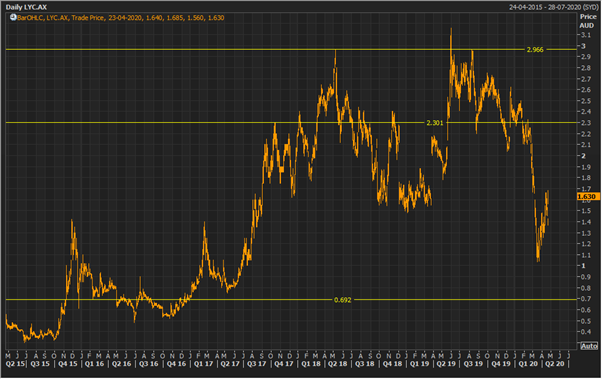