Recently, Magnetite Mines announced the results of a technical investigation into ore sorting. This is a technology which has the potential to transform the economics of the Company’s flagship Razorback Iron ore project and improve the sustainability outcomes by reducing water use and tailings generation.

Coupled with considerable enhancements to ore mass recovery, the suitability of the ores from Razorback Iron Project to bulk ore sorting has been validated by the to date results in the study completed by NextOre

Ore sorting has been used in mining for several decades, but its application to bulk sorting has been limited until recently due to slow detection speeds and orebody factors. However, Australia’s government scientific organisation, CSIRO, has been working on detection technologies for years and has been able to develop a breakthrough magnetic resonance detector that operates accurately at high speed. 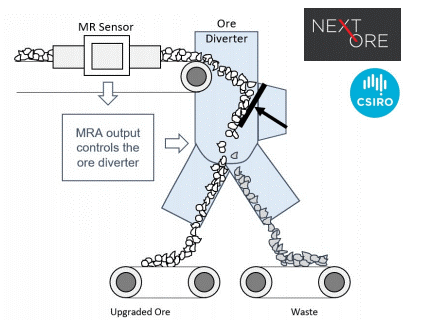 This technology is being commercialised by NextOre, which is a partnership between CSIRO and industry players Advisian and RFC Ambrian focussed on producing the next generation of bulk ore sorting technology.

MGT has the exclusive rights of the Magnetic Resonance analyser system of NextOre for magnetite processing applications throughout Australia and all iron ore applications in the Braemar Iron Formation for a period of 4 years. Working with NextOre provides a window for the Company to develop the technology and potentially gain a real competitive advantage in the marketplace.

The technology from NextOre comprises of an on-conveyor magnetic resonance sensor coupled with a downstream diverter gate, wherein the sensor continuously senses the grade of the material on the belt and the information thus generated assists in further controlling a diverter gate that splits material above the selected cut-off grade (Accepted Material), from the material below (Rejected Material).

Key Points from the Result

NextOre’s report demonstrates that the heterogeneity of the MGT’s Razorback and Iron Peak resources provided for the potential for substantial upgrading from ore sorting.

The Company believes that at a rejection level of 50% (corresponding to a cut-off grade of around 14% at Razorback and 16% at Iron Peak), the grade of the Accepted Material would be rising by a factor of about 1.4. The company will also be able to vary the concentrate grades easily and quickly on application of the on-conveyor ore sorter along with XRF instruments for real time analysis.

The throughput of a given plant capacity could be increased by around 40%, if this is to be employed as part of development of the project by increasing mining rates and pre-concentrating the plant feed. Further, it would also result in the creation of substantial decrease in capital and operating costs per tonne of concentrate product. Also, the increase in plant run of mine capacity and the mass recovery due to the application of on-conveyor bulk ore sorter would help optimise the concentrator’s efficiency and minimise the penalties due to impurities in the final concentrate product. 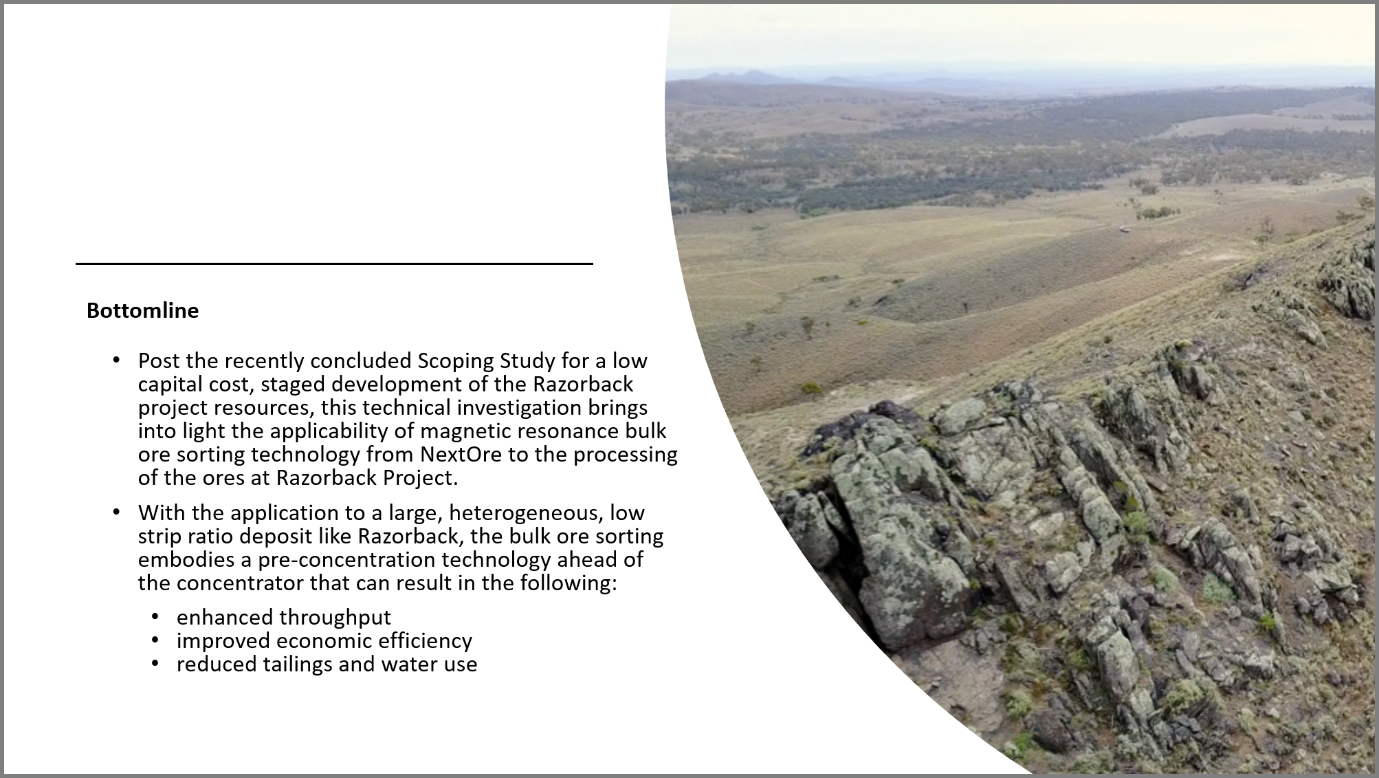 The Company recently completed its Share Purchase Plan, inching closer to the advancement of its Razorback Iron Project. The company is now planning a bulk sample technology development trial for 2020 to demonstrate the gains that the technology offers to the Razorback Project.