Volt Resources (ASX: VRC), headquartered in Perth, Australia, is an emerging graphite exploration company. All through the calendar year 2019, the company was primarily focussed on advancement of its flagship property, the Bunyu Graphite Project (100%-owned), located in southern Tanzania, towards production in the near term.

A Pre-Feasibility Study (PFS) into Bunyu Project was completed in December 2016, suggesting development to be taken across two stages and demonstrating robust technical and financial viability with a Mineral Resource Estimate (JORC 2012) of 461Mt @ 4.9% TGC, the largest in the country.

Thereafter, the company delivered a Feasibility Study (FS) into Stage 1 development in July 2018, based on a yearly throughput rate of 400,000 tonnes of ore for the production of 23,700 tpa of graphite products on an average for seven years. 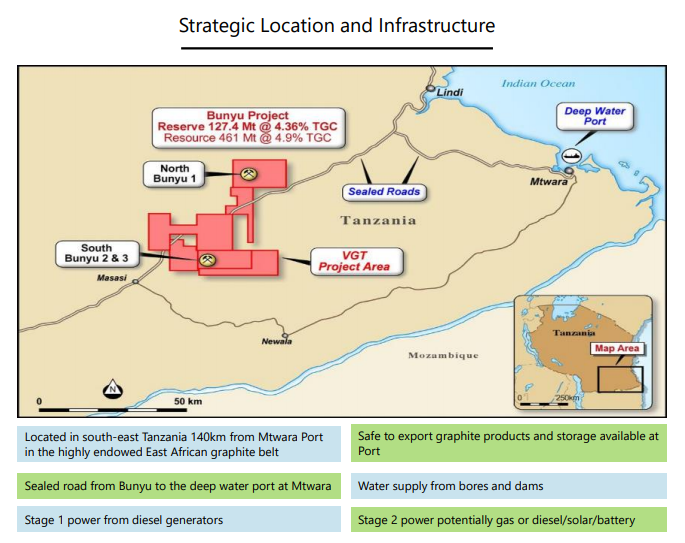 All key approvals and land access (referring to the figure below) have been granted to Volt Resources. 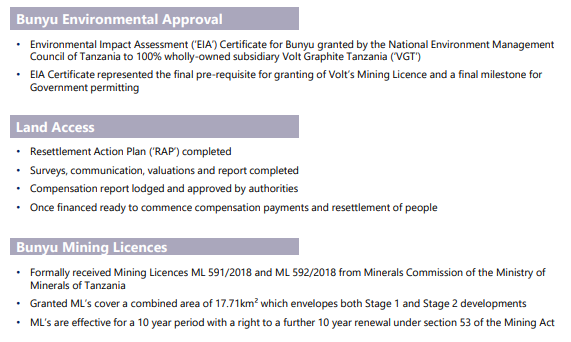 A couple of binding and non-binding offtake agreements have already been signed with major Chinese partners and US graphene producer, demonstrating a strong market appetite for Bunyu products. The company continues to seek further potential offtake contracts. One of the primary objectives of the company since the onset of 2019 has been to secure the targeted funding of USD 40 million for Stage 1 development. With regards to the same, Volt Resources has been working with Exotic Capital on the following initiatives:

In January 2019, Volt secured AUD 1.3 million 6-month funding facility, providing more funding flexibility to the company while advancing other funding activities. By the end of FY19, the companyâs financial position remained stable, with total assets of $23.73 million and total liabilities of $2.94 million. The company reported a net loss of $ 3.48 million while the net assets as of 30 June 2019 amounted to $ 20.79 million.

During the quarter ended 30 September 2019, Volt Resources undertook discussions with engineering services firms for the role of Project Management Contractor (PMC) while the contract terms & conditions are currently being finalised. The cash balance stood at $ 115k as at 30 September 2019.

A major chunk of growth in demand for graphite is being driven by the global steel industry, especially metallurgical applications, as well as the manufacturing of lithium-ion batteries (LIBs) being a key component in the electric vehicles (EVs), the demand for which is expected to shoot up in the foreseeable future.

The maturing markets for EV as well as utility storage are creating a lucrative near- and long-term outlook for graphite focussed companies, especially the coarse flake graphite producers.

Volt Resources is backed by a team of experienced and accomplished personnel as it transitions from the ongoing phase of project studies and funding to development and production at the Bunyu Graphite Project. The company recently raised ~ $ 612, 907 through a 1 for 12.9 non-renounceable Rights Issue closed on 13 December 2019.

Stock Information: Volt Resources has a market capitalisation of around $ 18.43 million with ~ 1.68 billion shares outstanding. On 20 December 2019, the VRC stock settled the dayâs trading at $ 0.011 with ~ 1.05 million shares traded. Besides, VRC has generated a positive return of 10.72% in the last three months.