In an update announced today, the company informed that the Lindian drilling program has progressed with completion of 12 out of 66 holes at Pare Project. Lindian’s team noted bauxite mineralization with thicknesses of up to 10m at the Pare project. The team obtained an average of 58.53 per cent Al2O3 with an average of 5.05 per cent SiO2. Thirteen samples were collected close to and in the area and have been sent to the geological survey of Tanzania for assay.

The drilling program was undertaken under the campaign in which 66 and 41 auger holes have been planned for both the Tanzanian Bauxite projects - Pare and Lushoto Bauxite projects respectively. On 12th March 2019, the company notified about the commencement of its drilling campaign on the Pare project, post which it intended to drill Lushoto project (targeting Magamba South Deposit and the Kidundai deposit). 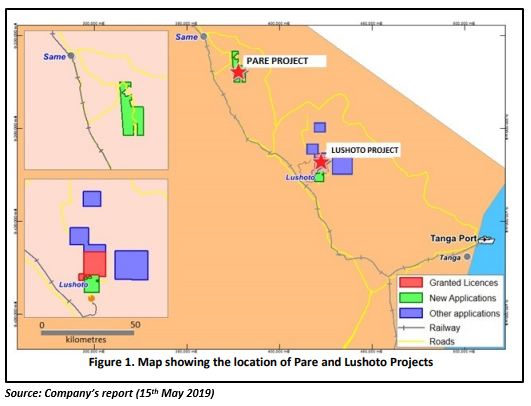 The bauxite mining has occurred in the past at the Pare deposit (application license PL/13564/2019) for the supply in the local market, but bauxite for export into the aluminium industry is yet to occur in Tanzania. This is because of the recent occurrence of the seaborne trade in the country and the relative immaturity of Tanzanian bauxite development.

A total of nine samples were collected at the Lushoto project (Tenement PL/13400/2018) and sent to the Geological Survey Laboratory for analysis. Lindian’s team obtained very encouraging results - an average of 48.05 per cent Al2O3 with an average of 0.9 per cent SiO2.

Last week, the company announced that the assay results confirmed the high-grade potential of the Guinea Bauxite Project in its ongoing due diligence process. The samples were sent to Bureau Veritas for the assays, and the results showed a good correlation with the highest assay returning 67.5 per cent Al2O3 with 0.47 per cent SiO2. To acquire the Gauoal Bauxite Project, an exclusive option agreement was signed by Lindian with KB Bauxite Guinea SARLU and also with its sole shareholder Guinea Bauxite Pty Ltd on 10th April 2019.

Lindian announced its quarterly activities report and the cash flow report for March 2019 quarter on 30th April 2019. During the period, the application was granted to the company for the Pare Project and the Kidundai and Magamba South deposits (Lushoto Project). To fund the company’s ongoing exploration programs and working capital, Linden entered into a $1,000,000 unsecured loan facility during the quarter. The company had a cash balance of AUD 78,000 at the end of the quarter.