A company may require more funds over and above its retained earnings in order to expand its existing operations, develop new businesses, protect market share or buy another company. The requirement of the company can be fulfilled by either equity financing or debt financing method.

Equity financing is a measure commonly used by the firms to raise capital for achieving their short-term and long-term goals wherein they sell their shares to the public, financial organisations or institutional investors. The buyers of the shares receive an ownership interest in the company and become the shareholders of the company. By selling their shares, the firms offer ownership in return for cash.

The firms can also go for Debt financing method for raising capital wherein firms secure a loan from a financial institution and pay back the principal over time along with interest. However, the firm does not lose its ownership in the company by using the debt financing method.

As per several experts, the ideal financing option is to use a combination of equity financing and debt financing. 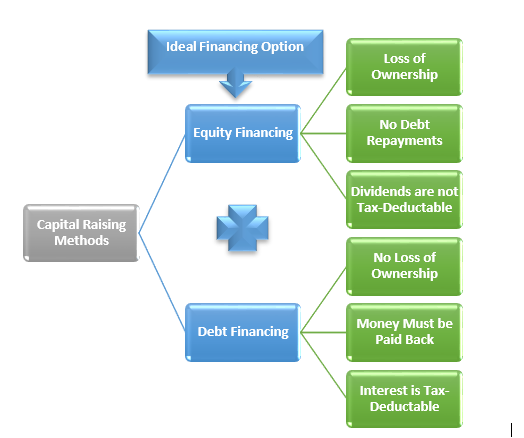 Now, the question arises how the share price of a company responds to its capital raising announcement?

If a company plans to sell more shares for raising capital, the holdings of the present shareholders get diluted. This generally creates a negative effect on the stock price as the dilution of a share usually causes a drop in per-share value. For example, suppose a company has 10,000 shares that stand outstanding and are trading at $100 per share. The company now decides to issue 1000 new shares and sell them into the market. Despite this announcement of selling new shares, the value of the company remains the same, but the number of shares that stand outstanding now increases to 11000. So, the value of shares drops on a per-share basis.

However, in some cases, when the company discloses how it intends to utilize the additional capital, a positive effect is seen on the stock price. For example, if a company is raising capital to buy assets or acquire another company, the stock price behaves favourably.

The capital raising announcements of a company are very crucial for investors as it helps them decide the current position of the company. Investors carefully observe that whether the company is frequently raising capital or not. This is because if a company is issuing new shares repeatedly to raise additional capital, a doubt on the companyâs financial position arises in the investorsâ mind. This indicates that the company is unable to maintain its financial solvency with the existing revenues and constantly needs additional financing.

Investors also closely monitor those companies that keep a viable plan for using the additional capital raised. They evaluate such companies and the potential of their ability to deliver success on the completion of their decided plan.

Who Can Raise Funds in Australia?

The Australian Securities & Investments Commission or ASIC has specified some rules for the fund-raising organisations in Australia. According to ASIC, the public companies (i.e. companies having over 50 non-employee shareholders) are allowed to raise funds from the general public through the issue of securities. However, the âproprietary limited' or the âprivate companiesâ (i.e. that have no more than 50 non-employee shareholders) can raise funds from the general public if the fundraising does not need a disclosure document. The private firms can also raise funds from employees and existing shareholders of the firm or a subsidiary firm.

Several ASX-listed companies are taking a path of Private Placement to raise capital. Let us have a look at some of these companies:

Titomic is expected to issue 4,117,648 new fully paid ordinary shares under the Placement at $1.70 per share. The share price depicts an 8 per cent discount to the 15-day VWAP (volume weight average price). The companyâs IPO brokers PAC Partners are working as a lead manager for the Placement, which is expected to settle on 11th July 2019 with the commencement of the trading of new securities on 12th July 2019.

Investors in the private placement will also receive ~2.06 million unlisted options, exercisable at a price of $2.50 within 2 years, potentially raising a further ~$5.15 million.

The company intends to use the proceeds from the Placement to fund international expansion with an aim to attain substantial revenue growth in 2020 and further. To achieve the expected revenue growth, the company is making progress towards new revenue generating contracts establishing its strong platform. Titomic has projected a revenue of USD$3 - $5 million from its projects for the period ending 31 December 2019. 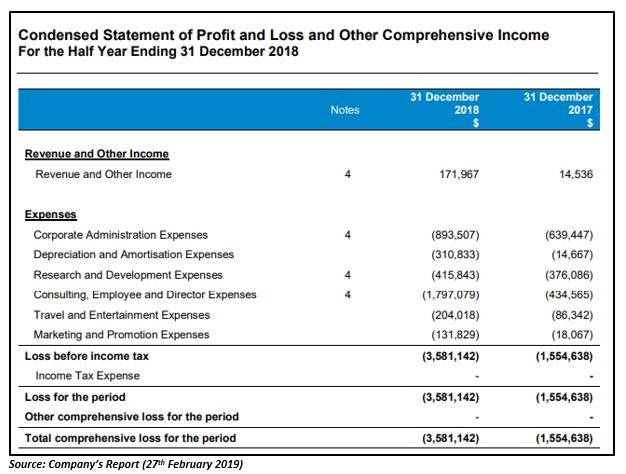 On 9th July 2019, the company announced an equity financing to raise ~AUD 10 million that will comprise of the following:

The company intends to utilise the proceeds received from the Entitlement Offer and Placement to drive the development of immuno-oncology and autoimmune programs (including LAG-3 related clinical program). The funds might also be used to pursue the appropriate regulatory pathways for its lead product candidate, eftilagimod alpha (IMP321 or efti). 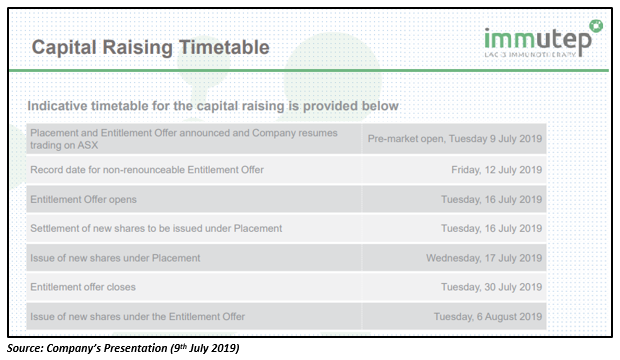 The companyâs interim financial report for the half-year ended 31 December 2018 was out on 27th February 2019. The companyâs revenue fell 100 per cent from $2.5 million reported in the prior corresponding period. The net loss for the period attributable to members of the company increased 100.7 per cent to $8.6 million.

The companyâs stock is currently trading higher at AUD 0.023 (as at 02:47 PM AM AEST on 10th July 2019), up by 4.55 per cent relative to the last closed price. About 5.1 million shares have been traded today as compared to its annual average volume of 1.9 million (as per ASX). The stock has delivered a negative return on YTD of 21.43 per cent.

LBT Innovations Limited (ASX: LBT) is an Australian medical technology company that is working towards improving patient outcomes by making healthcare more efficient using Artificial Intelligence. The company is based in Adelaide, South Australia and has been engaged in the development of world-leading products in microbiology automation.

The company recently announced that it has received commitments of ~$5 million for the Placement that was available to Australian as professional or sophisticated investors. The company had set the target of $4 million capital raising from the Placement which was later increased to $5 million with a number of new institutional shareholders additionally supporting the existing shareholders.

Under the Placement, ~34.5 million ordinary shares were issued at $0.145 per share to fund acceleration in sales activities in the US and Europe; ongoing analysis module development; general working capital, and the costs associated with the Placement.

In February this year, LBT released its financial results for the half-year ended 31st December 2018. The company reported a fall in the revenue by 48.7 per cent to $1.78 million during the half-year from $3.47 million in pcp. The total comprehensive loss of the company also widened from $1.03 million in pcp to $1.59 million.

LBT is trading at AUD 0.130, up by 4 per cent relative to the last closed price on 10 July 2019 (2:47 PM AEST) with a market capitalisation of AUD 29.42 million. The performance of the stock has been exceptionally well in the past as it has delivered a huge return of 43.68 per cent on a YTD basis.