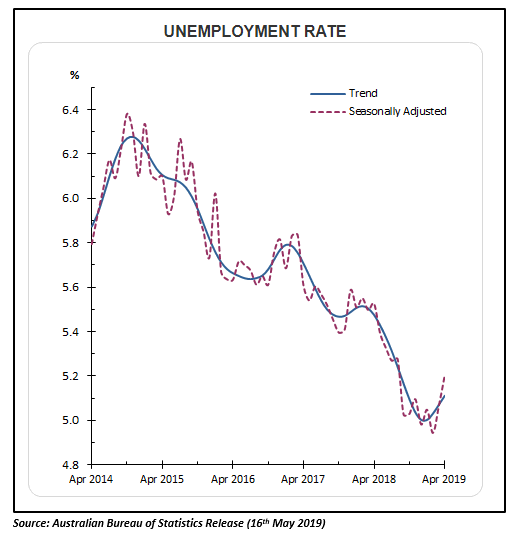 In April 2019, the trend unemployment rate remained unchanged in South Australia, Western Australia and New South Wales. It rose in the Australian Capital Territory, Tasmania and Victoria while it fell in Northern Territory and Queensland.

The table below highlights the trend estimates and seasonally adjusted estimates of labour force data in April 2019:

The current labour force data puts the RBA under more pressure to cut official interest rates. The bank kept the official cash rate steady at 1.5 per cent for the 30th time on 7th May 2019.

The speculations over a rate cut arose earlier after the data released by the ABS on 24th April 2019 indicated disappointing inflation in the March quarter 2019. However, the retail sales and trade surplus figures released by the ABS for March 2019 exceeded the expectations of the economists.

Afterwards, the RBA downgraded the near-term consumption and dwelling investment levels for Australia in a recent quarterly Statement on Monetary Policy (SoMP). The bank also reduced the economic growth target and the inflation target.

After the release of the labour force data, the economists now expect interest rates to be cut to 1.25 per cent next month. The anticipation is in line with the RBA’s statement that it will consider an interest rate cut below 1 per cent to get unemployment lower in the next 18 months.