At any point in time, it is always interesting to know which companies are going to make their ASX debuts. IPOs have always been in the news, augmenting investor enthusiasm since the inception of investing. In the first half of 2020, most IPOs were stalled due to the fear surrounding COVID-19 and the pandemic-led recession. However, lately, ASX and other exchanges globally have witnessed a surge in IPOs. Companies are getting back in the game and ready to take the risk of getting listed amid this still-volatile market. In this article, we would look at three upcoming IPOs in November 2020.

The Company aims to discover and progress current mineral resource projects, and where suitable, generate, earn into, or obtain new projects to create value for its shareholders.

Purpose of the Offer:

On 22 June 2020, Cassini announced that it would commence a demerger of its 100% owned subsidiary Company to hold its Yarawindah Brook and Mount Squires assets according to Demerger Deed and the Demerger Scheme.

Regarding the Demerger Scheme, Caspin Resources intends to apply for official listing.

Through the IPO, the Company intends to raise A$6 million (before associated costs) which would provide working capital along with financing for potential exploration and other initiatives at the Company's Projects.

Before the listing, the Company would issue additional securities as mentioned below: 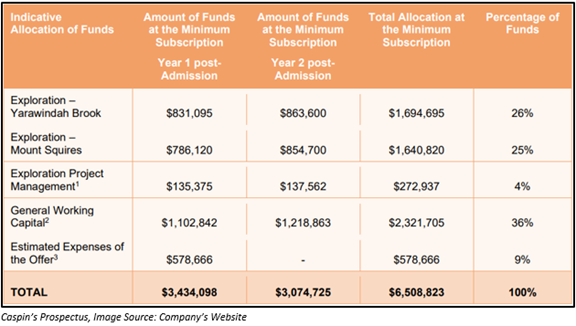 Harmoney Corp Limited started its journey in 2014 and is all set for its ASX debut on 19 November 2020. Since inception, the Company has worked to change the way people borrow and lend money. Harmoney aims to support and inspire people to achieve their goals via friendly, fair, and simple financial products.

Through its digital lending platform, Stellare™, Harmoney provides personalised loan product with requests processed and loans typically financed within 24 hours of approval by the customer. The Company operates in the personal lending segment of the Australian and New Zealand consumer credit sector. It is a constituent of the Australian and New Zealand financial services industry.

Why is the Offer being conducted?

Through the IPO, the Company intends to raise ~A$92.5 million, where 26.4 million shares would be issued each at A$3.50 per share.

At this stage, Harmoney expects that the primary proceeds of the Offer would provide the required capacity to fund growth in its personal loan originations for at least 12 months post the date of the offer and fund associated marketing expenses.

The proceeds would also be utilised to cover the costs of the offer.

WA Kaolin is a private WA-owned and operated mineral exploration, extraction and processing company prepared to grow with the rise in the demand for kaolin which has a brighter future and increasing applications.

People use kaolin to prepare medicine, treat mild to moderate diarrhea, severe diarrhea, and cholera. Kaolin helps prevent bleeding from wounds. WA Kaolin has no subsidiaries and is the only owner of the Wickepin Kaolin Project that is located in Wickepin, Western Australia. This project is amongst the largest recognised residual kaolin premium primary resources in the world.

Since the late 1990s, WA Kaolin has gradually been establishing itself. It is, at present, ready to expand and aim to become the ideal supplier of superior kaolin products to Asian and global markets.

WA Kaolin's resources were initially found and developed by RioTinto, and in 1998 it was acquired by WA Kaolin. The Company is expected to start trading on the ASX on 27 November 2020.

What is the Company's growth strategy?

The Company plans to build a production facility at its mining tenement in East Wickepin, WA which is a part of its staged expansion program to expand its kaolin producing abilities and prove itself as an exporter to global markets.

A definitive feasibility study was completed in September 2020, and it contains details related to strong ramp-up of kaolin production to 400k tonnes each annum with scope to increase the production capacity.

Why is the offer being conducted?

The Company aims to offer 110,000,000 shares each at A$0.20 to raise A$22,000,000 (before costs and expenses) along with a free attaching Option for every two shares issued. The proceeds through the IPO would be used to increase the kaolin producing capabilities via a staged expansion program and to establish itself as a global exporter.

Sources and Application of funds:

The total funds would be distributed as follows.

ALSO WATCH: The global IPO market amid COVID-19 and how did the Australian IPO market flare during the pandemic?