The Annual General Meeting of InvoCare Limited (ASX: IVC) was held on 14th May 2019, where the Chairman addressed to the shareholders. The Chairman highlighted the financial performance of the company in 2018. Operating performance in FY18 was impacted by unusual market conditions and location renovations due to which operating earnings were down 22.1% to $49.5 million, and statutory profit after tax also posted a de-growth of 57.7% to $41.2 million. However, management believes that the fundamentals of demand remain strong. Coming to the dividend distribution, the company continues its long-standing practice of a dividend pay-out ratio of more than 75% of operating earnings after tax.

On equity raising part, the company has raised circa $93 million in March/April 2019, of which the underwritten institutional placement was ~$65 million, SPP (Share Purchase Plan) was $23 million and DRP (Dividend Reinvestment Plan) was $4 million. The issue price for the equity raising was $14.00, which was more than 2.5% discount to share price immediately before this equity raising. With the combination of underwritten placement and SPP was put in place by the company for maximum certainty and minimum dilution. Funds raised from such activity will be used to maintain momentum in growth strategies and to strengthen the balance sheet. The Chairman acknowledged the strong support from the shareholders.

The company’s improved safety measures have resulted in a 2.3% decrease in the number of deaths for the company in FY18. As previously indicated, this is at the higher end of a decline, which was previously experienced. Funeral case average decreased by 0.3%, driven by the competitive pricing for the traditional brands. IVC anticipates the number of deaths to increase Y-o-Y (year on year) in 2019. 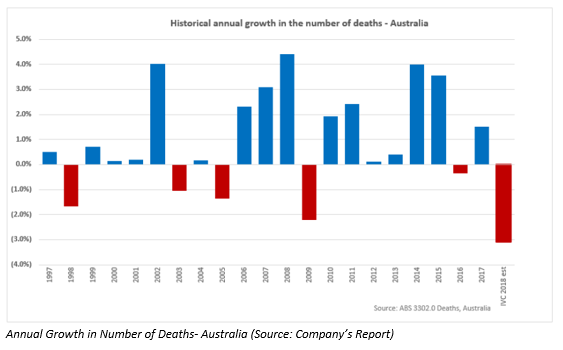 The company measures customer satisfaction using NPS (Net Promoter Score), which stood at +74 as of December 2017. IVC has implemented various steps taken, including investment in locations through Protect & Grow, launching of customer service reward scheme for operational staff, improvement in service proposition and brand standards and customer service master classes with 1,400 attendees. These steps have enabled IVC to achieve NPS score of +79 as of December 2018.

Q1 Performance Update: The number of deaths have begun to revert to the long-term trend, as suggested in February 2019. This rise along with the effect of 2018 acquisitions have resulted in a strong performance for 1Q FY19. The improved trading experienced in the early part of the year continued to prevail in Q1 FY19, and IVC achieved a sales growth of 7.8%, with operating EBITDA growth of 22.2%. The operating margin expanded by 2.5 ppts with operating earnings after tax at increasing by 9% over pcp.